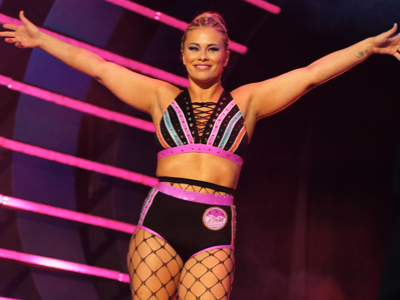 Former women’s UFC flyweight contender Paige VanZant is now an AEW pro wrestler. Arguably the second highest profile female fighter to make the jump to pro wrestling behind WWE’s Ronda Rousey, Paige has already made a splash. Instead of WWE she debuted in the All Elite Wrestling organization.

VanZant stepped in to the AEW ring for her debut at the “Double or Nothing” pay-per-view at the T-Mobile Arena in Las Vegas, Nevada this past weekend. Paige participated in and won a mixed tag team match and received a reaction from a smart fan filled crowd that can be fickle and worse, sometimes silent.

Paige spoke to ‘The Schmo’ about her match and transition to AEW.

I never give myself a perfect grade. There’s always room for improvement. I’m only going to get better. I just started training pro wrestling, but you got to see how quickly I picked up pro wrestling moves, and I showed all the girls in the division they got somebody to look out for. I came out of this match unscathed, I have zero injuries because I put on a dominant performance. I can’t wait for my solo match.

Check out the full conversation below: