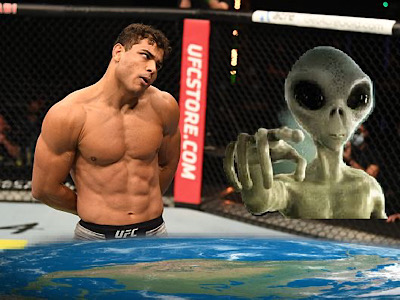 I believe we are witnessing the crash and burn of another UFC fighter. We have seen it before and we will see it again.

It may be a little early to make that call but we are talking about a guy who just had his ego smashed into little bits by Israel Adesanya. A fighter that a short time ago began tweeting about conspiracy theories. Now he has withdrawn from a high profile fight.

You can probably guess that former middleweight title challenger Paulo Costa is the individual I am speaking of. He was set to face Jared Cannonier but it was reported that Paulo had pulled out of the fight with no explanation. Now he has given what he claims is the reason for his exit from that bout.

I cannot believe he doesn’t have a handler or an agent to stop things like this from getting on social media.

He is an exciting fighter but in no way is he a massive fan favorite. If he were somebody fans were going bananas over it would probably get him somewhere. If he was a regular drawing pay-per-view headliner it would probably do him some good. Then again, this type of public bashing has not worked out well for anyone in the past and his reference to Jake Paul’s attack on Dana White about fighter pay is definitely not going to help him.

Paulo is by all appearances becoming a part of the Twitter crowd who use the platform to spread conspiracy theories and post inflammatory, often hyperbolic statements. Recently his flat earth tweets among other things have gained him the wrong kind of attention. He is a prime example of why someone with notoriety needs a filter.

If things continue I predict that in six months we will be seeing him in Bellator or a freak show boxing match. Dana White is going to have some choice words for the man he made sort of famous and probably, possibly drop him without a second thought.