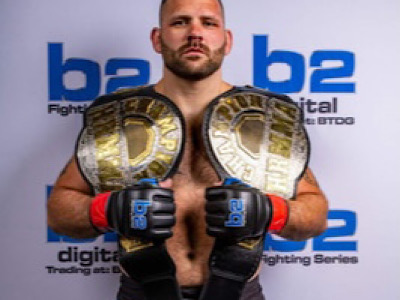 HRMMA heavyweight champion Harry Hunsucker took a fight on Dana White’s Contender Series on very short notice. Despite starting off strong he faded a bit and would eventually lose. That has not deterred his mission to fight in the big leagues one bit. This Saturday at HRMMA 119 he faces his biggest, literally and figuratively, challenge to get back on the show.

Harry will face off with 313 pound Cory Moon in a five round affair for the heavyweight championship. Hunsucker Is active on social media and frequently posts images and videos of how hard he has been preparing. From the looks of things he has incorporated a little more strength training this camp while attempting to maintain his speed. Moon is known for his powerful stand up and willingness to stand in the pocket and engage which is a dream for the champ because he does the same.

Matchmaker Brandon Higdon told Pro MMA Now that he is really looking forward to this fight because it has been on his radar for sometime. He described the bout as “one shot, don’t blink, or you will miss it“.

B2 fighting is the force behind the broadcasts of the HRMMA pay per views and for each event the buy rates have grown exponentially. Having Harry in the main event is sure to help sales due to his popularity and fighting style. Selling tickets and pay per view buys will also help you get noticed by the UFC.

HRMMA 119 takes place in Bowling Green on Saturday serving as the second event of the weekend doubleheader at the Bowling Green convention center. Visit B2 Fighting to purchase the PPV.