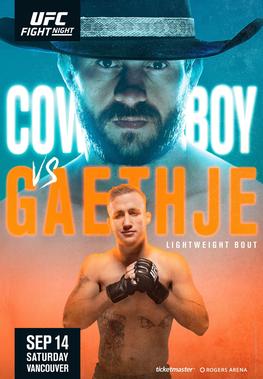 Donald “Cowboy” Cerrone is one of the most exciting fighters on the UFC roster. The league’s record-setting performance bonus winner has always been known as one to fight anyone at any time and as often as possible. It’s likely he never turned down a single fight in his life if he was physically capable of making the walk to the octagon.

On Sept. 14, 2019, Cowboy is slated to face-off with former WSOF lightweight champ Justin Gaethje in the ESPN+ 16 main event at Rogers Arena in Vancouver, British Columbia, Canada. Gaethje is also one of the league’s exciting standouts due to his lay-it-all-on-the-line fighting style. And because of his power. The 30-year-old former NCAA Division I All-American has knocked out all but three of the 20 opponents he’s beaten during his pro mixed martial arts career.

Cowboy, a former undefeated pro kickboxer, has also knocked out his fair share of opponents including Matt Brown, Rick Story, Patrick Cote, and others. But he’s also very dangerous on the ground and has 17 submission victories to his credit as well. That being said, the MMA and UFC oddsmakers are giving Gaethje the edge in this fight at -200 and they have Cowboy the underdog at +170.

Sportsbetting24.ca can provide you with all the information you need if you’re thinking about placing any bets on this UFC blockbuster fight. And despite Gaethje’s unarguable knockout power, Cowboy has more ways to win this fight if he can withstand the pressure that Gaethje will certainly be putting on him in the cage.

Cowboy had an impressive winning streak going over Mike Perry, Alexander Hernandez, and Al Iaquinta, before having his June “fight of the night” against Tony Ferguson stopped by the doctor due to a swollen eye after he blew his busted nose during the bout. Gaethje has won his last two fights in a row which included a first-round knockout over James Vick in Aug. 2018 and a first-round knockout over Edson Barboza in March.

Gaethje has won performance bonus awards in every single one of his five fights so far since signing with the Ultimate Fighting Championship in 2017. Four of those awards were “fight of the night”. Combine that with Cerrone having won performance bonus awards in all of his last four fights, including three “fight of the night” awards, and you have the makings of one of this year’s must-see UFC matchups.