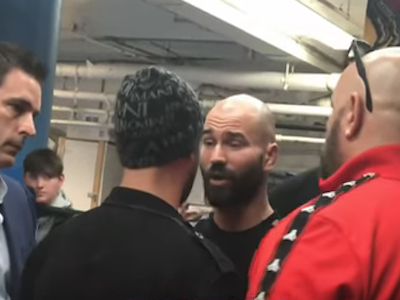 Paulie Malignaggi came face-to-face with Conor McGregor’s best buddy Artem Lobov at a Bare Knuckle FC media day event on Tuesday and after a heated exchange of words, the former boxing champion slapped the former UFC fighter and told him “that was a bitch slap for a bitch” and “I’m going to put you in a body bag.”

Lobov responded to the incident on Twitter saying, “I am told you got a sly cheap shot in, I thought that was a mosquito!” And “You know you get killed in a minute if the people weren’t there, You will be paying with your broken jaw!”

Fight fans will recall Malignaggi helped McGregor train for his pro boxing debut against Floyd Mayweather but left the camp disgruntled after sparring footage was released that showed Conor getting the upper hand.

How will Conor respond now that Malignaggi has slapped his best buddy? Remember what happened when Khabib Nurmagomedov roughed up Artem? It led to Conor flying all the way from Ireland with a gang of goons that led to the infamous bus incident in New York.

Hopefully Bare Knuckle FC cashes in and pits Lobov vs. Malignaggi against each other down the road. And who knows, maybe even McGregor will seek to go the bareknuckle route if things don’t work out in the UFC.