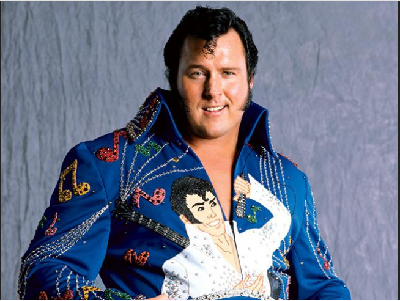 One of the bad guys we loved to hate is going to be immortalized in WWE’s hall of fame.

Wayne Ferris aka The Honky Tonk Man was one of the most memorable heels on the roster during the Hulk Hogan era. He was an obvious, and we’ll use the term most friendly here, “homage” to Elvis Presley. He had the guitar, the hair, the accent, and the gyrating hips all wrapped up in a ridiculously over the top bedazzled jumpsuit. He was unforgettable.

Here’s what WWE released to the media about it…

The Honky Tonk Man, the longest-reigning Intercontinental Champion in WWE history, is the latest inductee in the WWE Hall of Fame Class of 2019. The news was first reported by CBS Sports. The 2019 WWE Hall of Fame Induction Ceremony takes place on Saturday, April 6, the eve of WrestleMania 35, at Barclays Center in Brooklyn, N.Y. Tickets for the ceremony are available now.

With slicked-back hair and long sideburns reminiscent of a certain rock ‘n’ roll icon, The Honky Tonk Man first arrived on the scene in WWE in 1986 with a wide-eyed smile on his face, trying to earn the adulation of the WWE Universe. But WWE fans didn’t quite take to the Elvis lookalike, despite the stamp of approval from Hulk Hogan, as they jeered the newcomer relentlessly. A frustrated Honky Tonk Man called for a vote of confidence from the WWE Universe, and when the results came back overwhelmingly negative, the rockabilly wrestler snapped.

Enlisting the managerial services of fellow WWE Hall of Famer Jimmy Hart, The Honky Tonk Man unleashed his evil side, setting out to make his opponents twist and shout in agony. And if the damage he inflicted on his opponents wasn’t enough, he subjected the WWE Universe to his unique talents as a singer, facetiously thanking fans and telling them they were “a wonderful audience” as he belted out his own entrance music.

The new attitude was apparently just what the crooner needed, as he racked up victory after victory on his way to becoming Intercontinental Champion in June 1987 with a shocking victory over Ricky “The Dragon” Steamboat. Following his big win, The Honky Tonk Man went on to claim that he was the greatest Intercontinental Champion of all time. At first, that boast may have rang a little hollow, but his claims began to hold a little more water as his reign continued.

By hook or by crook, The Honky Tonk Man held onto the Intercontinental Championship for nearly 13 months before his reign ended in lightning-quick fashion at the hands of Ultimate Warrior at SummerSlam 1988. His record-breaking 454 days as Intercontinental Champion is a feat that has stood the test of time, as no Superstar has come close to eclipsing his unprecedented championship reign.

The Honky Tonk Man was, surprisingly, also willing to share the spotlight later in his WWE career, whether it was as one half of the tag team/band Rhythm & Blues with Greg “The Hammer” Valentine, or as the manager of Rockabilly (fellow 2019 inductee Billy Gunn of D-Generation X).

But once again, the spotlight will be on The Honky Tonk Man as he takes his place in sports-entertainment history. Don’t miss The Honky Tonk Man’s enshrinement during the 2019 WWE Hall of Fame Induction Ceremony on Saturday, April 6, at Barclays Center in Brooklyn, N.Y., during WrestleMania 35 Week. Tickets for this historic evening are available now!