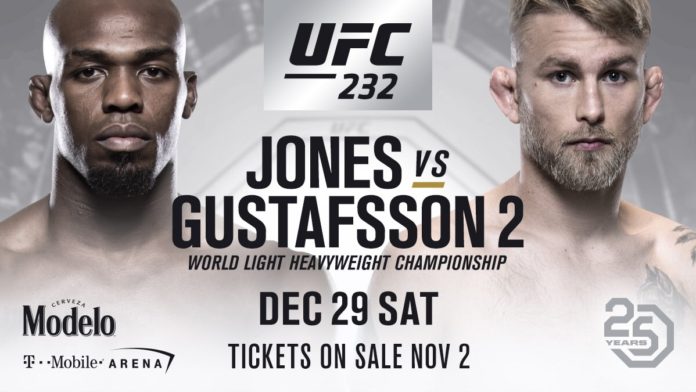 The two first met at UFC 165 in Sept. 2013 and saw Jones retain the title with a unanimous decision victory. However, it was a tough fight for Jones and Gustaffson still remains the toughest opponent the former champ has faced in his career by far. The height and reach of Gustaffson played a big factor in the matchup as Jones usually has the advantage in both those departments.

Jones last fought in July 2017 when he knocked out Daniel Cormier in the third round to regain the undisputed light heavyweight belt, however, he was later stripped of the belt due to testing positive for turnabol. It was later determined his transgression was due to a contaminated substance, unintentional, and he was given a 15-month suspension. He became eligible to fight again in October and was officially reinstated earlier this month.

There’s still a lot of questions on how Jones will look upon his return as controversy and suspensions have plagued his career in recent years. Having said that, there’s plenty of questions with Gustafsson as well who has been just as inactive as Jones for the last couple of years.

Gustafsson fought once in 2016, scoring a unanimous decision over Jan Blachowicz. And he fought once last year, in May, knocking out Glover Teixeira in the fifth round of the UFC Fight Night 109 main event. Prior to that he had dropped back-to-back losses to Cormier and Anthony Johnson in 2015.

With under two weeks until fight time, oddsmakers currently have Jones the favorite at -260 and Gustafsson the underdog at +240. These odds aren’t surprising and the gap still may shrink a little the closer we get to fight time.

Jones looked pretty great in his stoppage of Cormier last year and Gustafsson’s split decision loss to Cormier in 2015 was controversial and even had Cormier saying it was the worst beating he had ever taken in a fight at the time. This truly is the light heavyweight rematch every MMA fan has been waiting many years for and it will determine who is next line for a shot to become the undisputed 205-pound UFC king.

With an impressive victory Jones will move one step closer to showing fulfillment to the fighting potential everyone knew he had within him. If he takes out Gustafsson and wins an USADA-approved trilogy fight against Cormier, he will establish himself once and for all as the greatest light heavyweight of all time. But if anyone other than Jon Jones himself can put a stop to what once seemed like his absolute preordained destiny, it’s “The Mauler” Alexander Gustafsson.