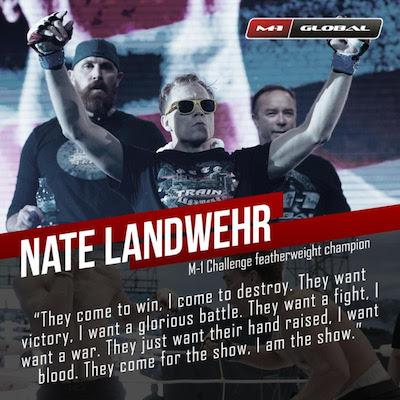 HOW TO WATCH: The live stream for M-1 Challenge Battle in Atyrau will be  available on www.FITE.TV (preliminary card is free and starts at 6 a.m. CT. Cost is $7.99 for the main card and starts at 10 a.m. CT).

The challenger Lezhnev has won nine of his last 10 fights, including the last three in a row, to earn this title shot. Fighting out of the Ukraine, Lezhnev has only been stopped once in 25 professional fights.

Landwehr captured the 145-pound title last June at M-1 Challenge 95 when he knocked out defending champion Khamzat Dalgiev in the second round via  punches. Representing Clarksville, Tenn., Landwehr became the first American to win an M-1 belt and looks to make history again this weekend with a successful title defense.

In this new interview courtesy of M-1 Landwehr spoke about his upcoming title defense and shared his thoughts on Lezhnev as an opponent. He talked about winning the M-1 belt in Ingushetia and why he always travels with an entourage.

How does it feel to finally defend your title for the first time?

“I feel like I’m about to put on one hell of a show and one hell of a finish to close out the year for M-1 Global. When I was told I was fighting in Kazakhstan, I was thinking, hell yeah, I get to see a new country. Each fight has been in a new city and new region. It’s exciting! One man, one city, one country at a time. Everybody will know about Clarksville, TN and The Train.”

You captured the title on the home soil of your opponent in the Republic of Ingushetia, Russia. Did you feel any pressure?

“I headlined the show in front of 13,000 people and finished just like I said I would, even with Dalgiev not making weight, poking me in the eyes and picking my nose. I became the first American featherweight (M-1) champion, so, to me, it was just what I expected. After the fight I had dinner with the President of Ingushetia. We got along very well. He even invited me back and to bring my wife. I never feel pressure for a fight, because I do this because I love it and I really, really, really enjoy punching people in the face. And putting on a show for the thousands of fans. I was born for this life!”

Promotion pays for tickets and accommodation for one cornerman for regular fighters, two for challengers and champions, but each time you bring many people with you. Your team includes six people this time. Why is it so important for you to bring so many people?

“I bring all my people and even pay for them out of my own pocket. I do this because they deserve to be beside me as my dreams come true. Mike Merriman has been with me since the beginning and he’s like an older brother. Angel Natal came onboard not too long after that and he is like a father. He’s also bringing his wife, Gloria. My boy, Christian Nielsen, is the newest member to the crew. My wife is my love and she’s always by my side.”

Many featherweights challenged you after you won the title. Now some of them say that you are afraid of fighting them and that you chose Andrey Lezhnev because he is not the most dangerous opponent. What do you say?

“I am a fighter and I fight who M-1 president Vadim Finkelchtein and the matchmakers want, whenever and whoever. But to all the contenders, don’t worry you’ll have an ass whoopin’ heading your way real soon. So, when they call you for the big show, be ready. Everyone wants to fight me, but I think either Busurmankul Abdibait Uuly or Viktor Kolesnik should be next.”

What is your predictions for this fight?

“I knock him out in the first round, or late in the second. For him losing should not be that bad, hell, he has already been beaten seven times and TKO’d. I am going to beat him worse than he ever has been beat.