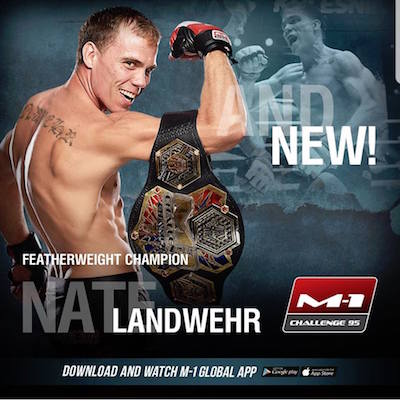 Clarksville, Tennessee pro mixed martial artists Nate “The Train” Landwehr and Edward “The Ninja” Massey made their hometown family and fans proud early Saturday morning when both won their fights by knockout at M-1 Challenge 95 in Ingushetia, Russia. Both fighters train out of Wildside Fitness and Martial Arts/SSF Submission Academy in Clarksville under the guidance of coaches Mike Merriman and Angel Natal who were in their corners on Saturday.

Massey faced the previously undefeated Mate Sanikidze in a 135-pound matchup on the undercard and stopped him in just 18-seconds with a spectacular head kick knockout that left the Georgian fighter in a slumped heap on the canvas. The 24-year-old Massey had previously made a name for himself on the local circuit and this was his first fight for the world renowned M-1 Global promotion, but with a highlight reel finish like that you can bet it won’t be his last.

Check out Massey’s stunning finish below:

A post shared by WildsideFitnessAndMartialArts (@wildsidefitnessandmartialarts) on Jul 21, 2018 at 6:16am PDT

After leaving a lasting impression on Russian fight fans and winning two previous outings under the M-1 banner, Landwehr challenged the promotion’s featherweight champion Khamzat Dalgiev in the M-1 Challenge 95 main event. The beautiful backdrop of the Ingushetia countryside at the outdoor event provided a picturesque scene for Landwehr’s favorable destiny to unfold and made the long hard road he traversed to bring home the gold back to Clarksville even sweeter.

To start with Dalgiev came into the fight 7-pounds overweight. That much of a discrepancy would void a title fight in most cases, however, anyone who knows Landwehr knows he came to fight hell or high water. It was also obvious from the opening bell that Dalgiev wanted little to do with Landwehr’s standup game and looked for the takedown as soon as possible. Dalgiev was able to score a few takedowns but was unable to capitalize with damage and was even rocked by Landwehr with punches off his back at one point.

Despite the takedowns Landwehr continued to get back to his feet where he pressured Dalgiev with his dangerous striking. After thwarting a takedown attempt from Dalgiev in round two, Landwehr locked on a tight guillotine choke that possibly could have ended the fight had Dalgiev not gouged his eyes which forced Landwehr to release his grip. Landwehr postured up in full mount at that point and reigned down punches on the 27-year-old Russian. This caused Dalgiev to give up his back and Landwehr continued the assault to the sides of his head until the referee was forced to stop the fight leaving the former champion face down and limp on the canvas.

And just like that Nate “The Train” Landwehr is the new M-1 Global Featherweight World Champion. With Landwehr being arguably the most marketable and exciting fighter on M-1’s roster, and with the Russian promotion’s new partnership with the UFC, this gold star victory for Landwehr could not have come at a more opportune time.

Here are the full results from M-1 Challenge 95: