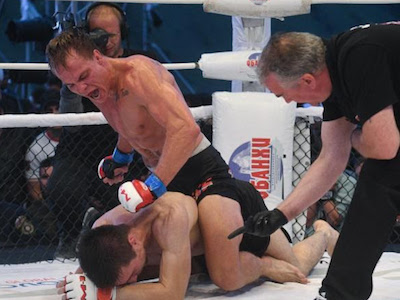 M-1 Challenge featherweight champion Nate “The Train” Landwehr will make his first title defense on Dec. 15 when he faces Andrey “Iron” Lezhney in the M-1 Challenge 100: Battle in Atyrau main event in Atyrau, Kazakhstan. The event will stream live from Kazakhstan on FITE.TV (preliminary card is free, $7.99 for the main card).

Fighting out of Clarksville, Tenn., Landwehr (11-2-0, M-1: 3-0-0) returns after capturing the coveted M-1 Challenge featherweight title this past July at M-1 Challenge 95 in Nazran, Ingushetia, Russia, where he stopped defending champion Khamzat Dalgiev via punches in the second round. Landwehr earned his shot at the belt by winning a split decision over Viktor Kolesnik at M-1 Challenge 85, preceded by a third-round TKO stoppage of Mikhail Korobkovvia at M-1 Challenge 83.

“Make no mistake,” Landwehr said, “I want to put an ass whooping on everyone in the division. Lezhnev is just the next in line. Don’t think of me as just the champion, think of me as the baddest S.O.B that can make 145 pounds. I will be coming at him as if I am still a hungry challenger trying to make a statement to become a champion.”

“I would love to have a tournament with all the contenders,” Landwehr continued. “We’d all fight multiple times on one night against everyone and the last man standing is crowned King. But, for now, I will fight who M-1 feels is the next contender. If you have a problem with that, then it means you are not as impressive as a fighter as you think. Because I convinced them in two fights that I was the one for the job and I got the job done in my third (M-1) fight.”

Fighting out of Ukraine, Lezhnev (18-7-0, M-1; 6-3-0) earned this title shot by winning nine of his last 10 fights, including his last three in a row inside the M-1 Challenge Rage. Lezhney most recently submitted Asikerbai Jinensibieke in the first-round at M-1 Challenge 91 back in May.

“Landwehr is a typical brawler with nice cardio,” Lezhnev commented. “Everybody who plays by his rules loses. He is also very provocative, he loves creating the hype around him. For a long time, he tried to avoid this fight, challenging guys who passed their prime, because he understood he had no chances against me. But now the time has come to beat that hype out of him.”