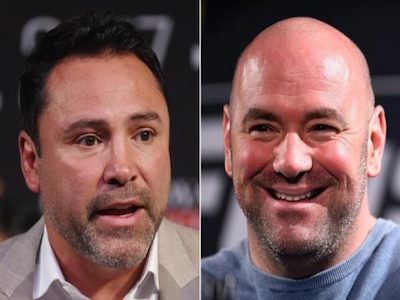 Golden Boy Promotions held their first MMA event this past weekend with Liddell vs. Ortiz 3 and we saw Tito Ortiz get redemption from two previous losses to Chuck Liddell by knocking him out in the first round. UFC President Dana White has since slammed the promotion’s front man Oscar De La Hoya as a “cokehead” and criticized him for allowing the 48-year-old Liddell to fight again. Now The Golden Boy has responded to the UFC President via a statement obtained by MMAJunkie:

“Dana is so small and threatened by our success with DAZN and now in MMA that he is bringing up news from a decade ago to try to stay relevant,” De La Hoya said, according to a statement, sent by Stefan Friedman. “Boxing has entirely rejected him. And MMA fighters are now realizing they don’t have to risk their lives just so he can get rich.

“Golden Boy and I are moving forward and are bigger than ever. Dana should shut the (expletive) up and try to figure out how to save his own company.”

Ortiz, who has his own past rough relationship with White, also addressed his old boss after his criticisms of Golden Boy MMA and Tito’s involvement with the promotion.