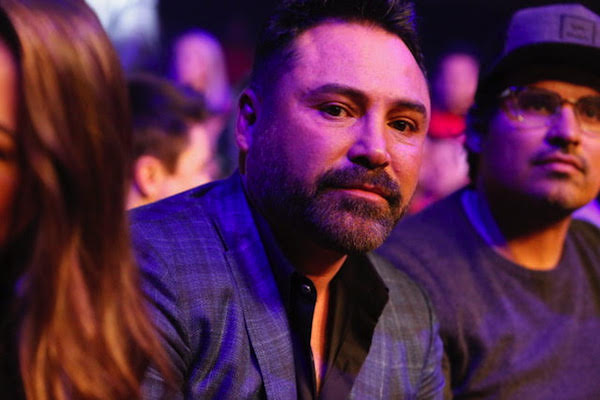 It took twelve years for Tito Ortiz to be victorious in winning gold and burying Chuck Liddell with a tremendous first round knockout, within seconds its event became a Golden night for Oscar De La Hoya’s Golden Boy Promotions, which historically entered the mixed martial arts market. Golden Boy celebrated its inaugural event on Saturday Nov. 24, 2018, at the Forum in Inglewood, Calif.

The golden spectacle of the event was visionary billed and headlined as a rekindled rivalry through the lure of its inevitable third fight of a multimillion dollar payoff final trilogy between the two great veteran fighters. However in a world of marketing appearances, The Iceman hadn’t stepped foot in the cage for close to a decade and in this business of show business you better know it’s an icy cold business.

In this cruel sport there is no time for the appearance of disguise, for Father Time as he is known is the enemy of all athletes represented through its symbolic personification as he visually waits holding in his hand its proverbial axed scythe with hourglass. Its most famous King Midas was popularized in Greek mythology for his ability to turn everything that he touched into gold. In literal form it was called the golden touch, or the Midas touch.

It was once long ago in a way distant past that the youthful Chuck Liddell defeated Tito Ortiz, achieved twice in his illustrious career, once in 2004 and again in 2006. But over a decade has since passed which was only rekindled through a cruel market of hype of bitter rivalry. Even the astute UFC’s Dana White declared his love for Chuck and chose to pass on being attached to its fight while only Oscar De La Hoya and his Golden Boy Promotions were invited to become participants to its theater of cruelty to watch the Iceman square off with the Bad Boy with its promised incentive of gold, wealth and recognition.

Through the looking glass and with apparent limitation the Iceman’s age and loss of skills had finally caught up with Chuck, who’s chin and speed had obviously declined in time. When the great WW II pacifist and British Ambassador Winston Churchill stated that history belongs to its victors it was Huntington Beach’s Bad Boy Tito Ortiz who historically authored and earned his first victory of its epic trilogy and promptly announced his retirement stating, “I am done.”

In its final allegory, Huntington Beach Bad Boy Tito Ortiz was victorious with a classic Midas touch in freezing the Iceman at 4:24 of the 1st round. And throughout all great allegories there is always a lesson to learn in knowing when to fold your played out cards through its song.

In its fight analysis, at the opening of the bell, Chuck attempted to compete with the pace of the competitive and highly active Tito Ortiz, but once in the cage the Iceman skated for his life knowing he was in actuality on thin ice. Signified through the frozen fear in his eyes, the Iceman was no longer hunting for prey but became its hunted prey. And when Liddell finally attempted to counter there was no power or pull in his punches. Only the former shell of a fighter could now barely survive the first round of its Ice Age.

From the onset it was Ortiz who put the Iceman’s freeze on notice, a left to the chin sent wind chill factors across his chiseled icy facade, and one last right hand brought the cold reality that this antagonist was in for a fight for his life inevitably injuring and insulting what was left of his frozen legacy. The ice cold reality of Tito’s pummeling punishment had finally brought the once great fighter to his knees in front of his loving wife where Herb Dean urgently gave the signal to stop what was left of its unkind contest in saving his life within seconds at 4:24.

This Heart is cold…

Tito played on his opponent like a rat in a cold maze by casting the cheese in the pre-fight media that he was going to take down Chuck and outwrestle the boxer. The plan work as supported by Tito’s visionary coach Jason Parillo who was quoted as saying, “It was never to go to the ground! We trained to walk him down. And put our hands on him. The Iceman did exactly what we worked on.”

The sagacious Ortiz elected to outbox the boxer through its classic one-two punch defined by its fatal combination of two blows delivered in rapid succession thrown with an optional lead followed by a cross employed with such a deadly force taking out the unexpected fighter. For the Iceman had finally reached his icy point of no return.

Across the cage, Ortiz had ceremoniously buried the mythos of the Icemen, his hands raised securing his Nostradamus pre-fight prediction of a first-round knockout breaking the ice of the “The Iceman” who was poetically out as cold as ice quoted like an academy award winning performer. “I did it like I said I would! The whole game plan was to never go for a takedown.”

Like Shirley Bassey’s song of James Bond 007, Goldfinger could not have been more of an appropriate theme for the alliance of Tito Ortiz and its Golden Boy Promotions. Its significance as its venture was the greatest promotions team in boxing, which began its campaign as a battle for the prospect of Gold. The sport of Mixed Martial Arts has now become the backdrop of a modern Lewis and Clark as its journeyed expedition swam upstream for mammon and gold exclusively explored through its market speculation. Today there is a new kid in town that everybody is talking about that new kid in town is called Golden Boy.

ONE CEO and Chairman Chatri Sityodtong was asked in a MMA publication of what determined the success of building a fight promotion brand. “Martial Arts can be a great teacher of valuable life and business lessons which include patience, discipline, understanding your opponent, learning to deal with discomfort, and most importantly, learning to get back up every time you get knocked down, which happens on a daily basis as an entrepreneur,” he stated.

But today many fight organizations and its fighters know only how to fight and not back down.

Cynics of MMA say that the marketing hype has ended the integrity of the sport. At one point in time there was a golden age of heroic championships, when there were only a few champions who fought for legitimate fight titles. But to the true fanatic of the MMA sport, hyped up bullshit championship fights started to lose value in perdition. Promoters know today that producing a championship fight will no longer guarantee you millions of pay-per-views.

Today we are seeing the demise of a sporting institution where rank has been filed, where visionary promotions like the UFC is journeying down the same perilous path of boxing, where fight championships will ultimately become all about staging personalities with empty publicized campaigns which has nothing to do with authentic championships but are only staged as veneers or sets which are ever forgetful that the greatest championship fights are organically created through a credible ranking system.

The myth of a championship fight and its ranking system has gone by the wayside fueled by the dictated speculation of its market to consume the consumer. Today, if you put on a championship fight, its appearance states that you will be guaranteed a million buys on pay-per-view, but if the packaging of the fight has the wrong marketing you will absolutely receive no attention from the media or its fans as audience.

The issue is that Professional Mixed Martial Arts is a successful dynamic and diverse sport internationally renowned throughout the world by the publicizing of its forms of successful marketing. MMA is a sport followed by not only being a business yet embraced by the society of spectacle noted most for its savage and cruel entertainment value as form.

As a final revelation of the crisis of its sport, The California State Athletic Commission (CSAC) executive officer Andy Foster defensively approved the highly critical Liddell vs. Ortiz 3 massacre fight, where his decision came down to one specific factor whether he believed the fight was a mismatch, in response to which he did not believe it was and was quoted as saying, “I think with the fight game, we should perhaps change the focus to promoting these younger, up-and-coming fighters. I think that’s good for the sport.”

Yes in retrospect, Chuck Liddell and Tito Ortiz did in fact meet for the third time in a spectacular trilogy headlined bout. Yes, it was Tito who finally scored his redemptive victory but it was Golden Boy Promotional team, who were its ultimate victors through engagement in the sport of MMA with its subtle genius revision of its narrative and history.

As Golden Boy successfully entered the mixed martial arts market where Oscar De La Hoya, the head of Golden Boy, publicly promised that Liddell and Ortiz will make more golden money off of the bout than they ever did while fighting under the UFC banner, where both were champions. But on Friday the California State Athletic Commission publicly disclosed fighter payroll for the pay-per-view bouts for its event where both fighters were expected to receive a significant amount of money proceeds as compensation from pay-per-view buys as well as receipts from its golden gates.

*An undisclosed percentage of earnings from PPV buys will be added to Liddell and Ortiz’s salaries.

The outspoken Nice-man Ortiz on his final platform as its dais encouraged the Iceman not to retire also encouraging many of today’s disgruntled and exploited fighters to join Golden Boy Promotions MMA to receive their payment in full.

Lets go to the Good as Golden results:

History of the Ortiz vs. Liddell Trilogy

UFC 47: It’s On was a mixed martial arts event held by the Ultimate Fighting Championship on April 2, 2004, at the Mandalay Bay Events Center in Las Vegas, Nevada.

UFC 66: Liddell vs. Ortiz was a mixed martial arts (MMA) pay-per-view event held by the Ultimate Fighting Championship on December 30, 2006 at the MGM Grand Garden Arena in Las Vegas, Nevada. Through its second installment the UFC Light Heavyweight Championship bout at UFC 66 where Liddell won again by technical knockout at 3:59 in the third round. Liddell and Ortiz were at one point scheduled to meet for the third time at UFC 115 but Ortiz was forced out of the bout after an injury required him to receive neck fusion surgery. Liddell instead fought Rich Franklin.

Goldfinger Lyrics:
He’s the man, the man with the Midas touch
A spider’s touch
Such a cold finger
Beckons you to enter his web of sin
But don’t go in
Golden words he will pour in your ear
but his lies can’t disguise what you fear

Epilogue: Best expressed this report was authored as a narrative that can be interpreted to reveal a deeper more significant meaning as an allegory or as a literal form which is written, oral, or visual expressed that uses symbolic figures and tropes to convey apparent truths or generalizations about our human conduct and its experience. Its word traces back to the Greek word allēgorein meaning “to speak figuratively.”

As a literary device, the allegory selected was a metaphor in which a character, place or event was used to deliver a more relative message about our real-world issues in reporting its fight events.

ALL PHOTOS BY: PHANTOM STREET ARTIST (JOEY KREBS) FOR PROMMANOW.COM

ALL PHOTOS BY: PHANTOM STREET ARTIST (JOEY KREBS) FOR PROMMANOW.COM