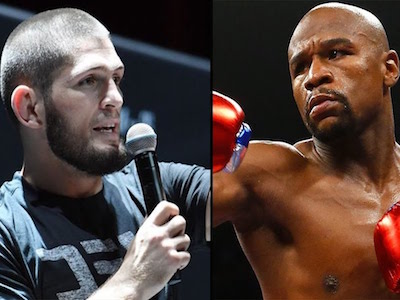 Floyd Mayweather versus Conor McGregor was at one point inconceivable – a crossover bout between the biggest name in boxing and in mixed martial arts.

Yet in September last year the bout materialized, taking place in the boxing ring, with a 40-year-old Mayweather predictably picking apart McGregor en-route to a tenth-round stoppage. Hindsight suggested the result was never in doubt and that the entire charade had been a money-spinning sham.

But we could we be set to see it all again?

A year on and the biggest name in mixed martial arts right now is Khabib Nurmagomedov, the unbeaten Russian wrestling machine who shattered McGregor’s return to MMA pastures, submitting the Irishman in the fourth round of their brutal encounter. Khabib’s post-fight antics of jumping over the cage to attack McGregor’s team went viral, causing widespread controversy and outrage with some suggestions that Nurmagomedov’s UFC career could be over as a result.

Now that the dust has settled however, the debacle has merely boosted the Russian’s profile and Khabib is certain to fight again. The question though is whether Nurmagomedov’s next bout will be in the cage or in the ring.

Khabib is the latest UFC star to be linked to a crossover combat sports event with Mayweather. Though the American boxer is ‘retired’, ever since Floyd’s win over McGregor in the boxing ring a return bout in the Octagon was heavily discussed and with Khabib now the top dog in the UFC, talk recently switched to Mayweather fighting the man from Dagestan.

Look who I ran into at tonight’s fights in Russia.

Mayweather responded, telling the Russian to ‘Show him the money’ but will reportedly (and perhaps sensibly) only take on Nurmagomedov under Queensberry Rules. While boxing aficionados and mixed martial arts experts may convulse at the thought of Floyd facing off with another high-profile MMA star in the ring, the fact is that in the social media age, novelty, even obscenity, sells and in Mayweather’s world, money talks.

UFC boss Dana White has told Khabib that he must next defend his lightweight title against Tony Ferguson, but that fight would do paltry numbers compared to a rematch with McGregor and certainly compared to a boxing match with Mayweather. With the exception of Mayweather vs Pacquiao in 2015, the biggest selling combat sports event in history was Mayweather’s bout with McGregor, which sold 4.3 million pay-per-view buys, while a further 3 million reportedly watched the fight on illegal streams.

On Monday, Khabib’s manager Ali Abdelaziz sent speculation of a Mayweather-Nurmagomedov showdown into a frenzy with a cryptic tweet that simply read ‘We will blow your mind big news coming @TeamKhabib’.

Bookmakers are already taking bets on the proposed event, with Mayweather a 1/25 favourite across popular betting apps and Khabib a best-priced 10/1 – odds that seem somewhat miserly for a boxing novice against a former five-weight world champion, even if Floyd will turn 42 in February.