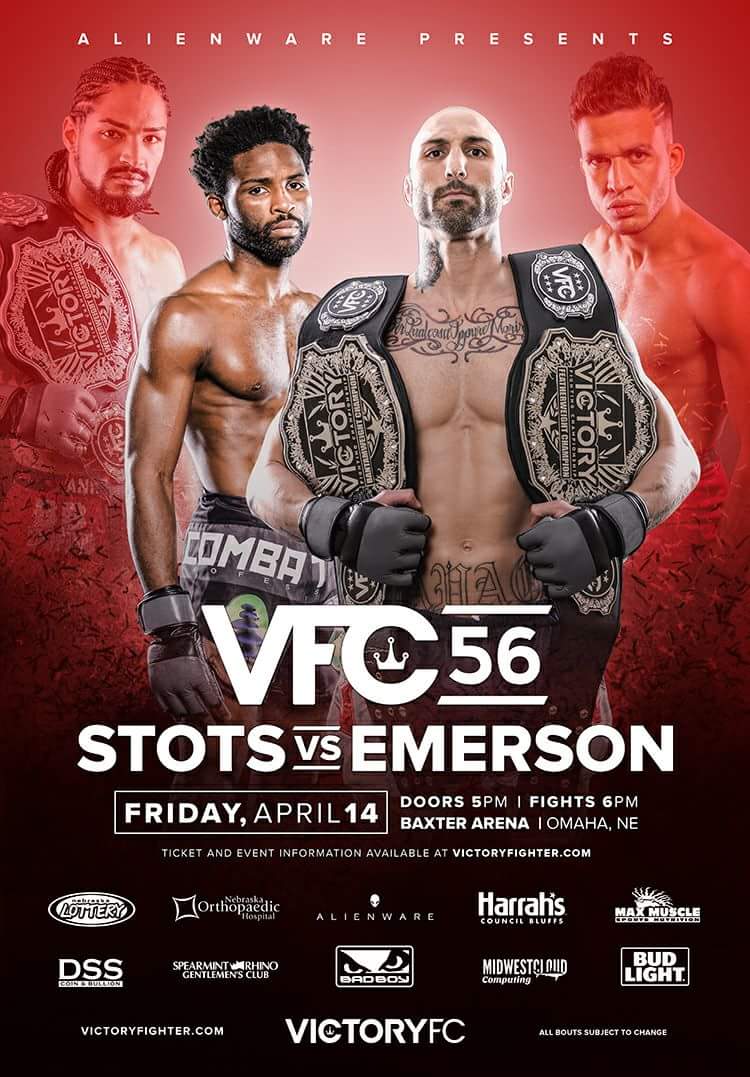 Two-division Victory FC champion Rob Emerson (19-11) will return to action on Friday, April 14 when he defends his bantamweight title against unbeaten Raufeon Stots (7-0) at VFC 56 live on UFC Fight Pass. ProMMAnow.com caught up with the 35-year-old UFC veteran and TUF 5 standout to get his thoughts on the matchup and what he has left to achieve in the sport.

How does it feel to be a two-division champ with Victory FC?

Being a two division champ is cool but to be honest I was bored of it by the next morning, I woke up hungry for my next goal. In this sport you are only as current as your last fight, and after 15 years in this sport I am just now hitting my stride and reaching my potential

What’s your take on your undefeated opponent Raufeon Stots?

Stots is undefeated because he has a padded record. The only legit guy he even fought was an out of prime and out of retirement fighter Jeff Curran. I am in my prime now and I am the most dangerous guy the kid will fight in his lifetime. He is a decorated Southpaw wrestler. But this is not a wrestling match and I’m not trying to wrestle him. Half of the opponents I’ve fought have been Southpaws. Its not a good style match up for the guy.

How do you see the fight playing out when you visualize it?

If he breaks or the ref stops it then I will win by TKO. If not then it will be a clean KO or sub.

Who is helping you prepare for this fight?

How did you get the nickname “The Saint?”

So “The Saint” was a name my friends gave me about 10 years ago back when I did The Ultimate Fighter season 5. We where all really in to the movie “Boondocks Saints” at the time and all my family is from Boston where the movie takes place, also I grew up Catholic so it seemed fitting….. But I’ve actually been trying to drop that nickname for a while now. I’ve actually spoken to my old Kyokushin sensi recently and he reminded me how he used to call me “Aianhato” in Japanese which translates to “ironheart” in English. This was back in the 90’s when the movie LIONHEART came out with Van Damme which we where both fans of but he said because of how ferocious I was as a small kid sparring these adults. He said I was “fearless” when I sparred and no matter how big they were I would always come forward hunting for their heads. I always competed against much bigger and more experienced guys in tournaments and would either get 1st or 2nd place.

You’ve been around this sport a long time, how have you seen it evolve and do you like where it’s going?

Yes I’ve seen the sport grow and at a rapid pace. We have the fastest learning curve out of any sport. I’ve been fortunate enough to not get to banged up over the years and and talented enough to stay ahead of the learning curve unlike most fighters “in my class”. I’m honored and privileged everyday to be part of the coolest sport on the planet!!

Do you have fond memories of being on The Ultimate Fighter 5, how do you feel when you look back on that time?

Being on the Ultimate Fighter season 5 was a great experience. I just wish I took it more seriously at the time. But I was young and growing up in Orange County I was too easily influenced by my friends and the distractions that come with being a young pro athlete at the time.

What more would you like to achieve in the sport?

My goal now is to get back to the UFC or another major promotion so that I can put on some of the most entertaining scraps in my division. I want performances and KO’s that people talk about and want to watch over and over again!!