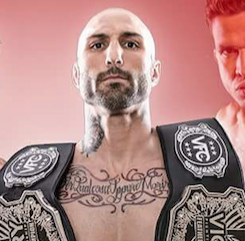 Two-division Victory FC champion Rob Emerson (19-11) will return to action on Friday, April 14 when he defends his bantamweight title against unbeaten Raufeon Stots (7-0) at VFC 56 live on UFC Fight Pass. ProMMAnow.com caught up with the 35-year-old UFC veteran and TUF 5 standout to get his thoughts on the matchup and what he has left … Read more

Recap
Last weekend was a pretty solid effort on my part. I went 11-3 with 1 NC, which brings my overall record to 35-8 (6NC). For those keeping track at home that is an 81% picking rate. However, I failed to include the Ben Askren and Ricco Rodriguez fights from last weekend, so this week I hopefully got all the possible match ups covered. This week we take a look at Shine Fights, XFC, VFC, and some ShootBoxing. As always if you think you know better, let me know in the comments section.

XFC 9 – Evolution
War Machine (9-2) vs. Mikey Gomez (9-7)
Despite his reputation as a troublemaker and a general oddball, Mr. Machine does have some MMA skill. It would have been better to see him face off against Roger Bowling, but due to injury fans get Mikey Gomez instead. Machine should be able to take Gomez down from the clinch and punish him enough to earn a late round stoppage.
Pick = War Machine

Vengeance Fighting Championship took place last night, September 27th at the Cabarrus Arena in Concord, NC. It was a great night of fights displaying some of the MMA talent from the eastern and southeastern U.S.. The night consisted of both amateur and professional bouts and in the main event, North Carolina’s MMA fans got to wtiness two UFC/PRIDE veterans go at it. Here’s how the fights went down:

Nick “The Brick” Blake vs. Patrick Needham(145lbs)
Rd.1 – Blake takes Needham’s back and sinks in the hooks. Blake gets a takedown but Needham is able to get back to his feet. Blake is able to drag him back down, takes his back quickly and locks in a rear naked choke with no hooks in. Needham taps. Nick “The Brick” Blake defeats Patrick Needham by rear naked choke submission in Round 1.