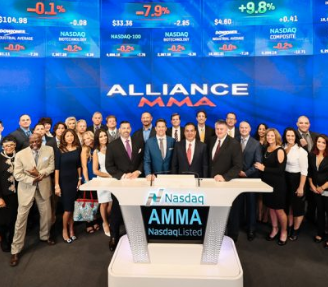 This is another big boon for Alliance MMA, who continues their growth within the regional MMA market. The company had already acquired notable regional MMA promotions V3 Fights, CFFC, Shogun, Coga and HFC, as well as the live streaming platform Go Fight Live and electronic combat sport ticketing platform CageTix. Now they have brought SuckerPunch under their umbrella who have more than 100 fighters under contract worldwide.

SuckerPunch has managed several UFC titleholders including Joanna Jedrzejczyk, Jens Pulver, Carla Esparza and most recently, Max Holloway. In addition to revenue generated from fighter purses, SuckerPunch brings revenue in the form of sponsorships for both fighters and promotions.

“We expect that SuckerPunch will prove to be an extraordinary addition to the Alliance MMA organization. Their broad experience in managing a number of the sport’s top fighters will bolster our ongoing effort to expand the growing family of Alliance athletes, and will fortify Alliance’s position as a prominent force in the MMA community.”

It seems to be another win-win scenario for the company and MMA as a whole as SuckerPunch’s large clientele will benefit from the increased exposure, which should in turn make the sponsors happy, and ultimately more revenue is funneled into the MMA marketplace.

“We expect that the Alliance MMA platform will prove to be highly beneficial for fighters on all levels. Our up-and-coming prospects will now have direct access to geographically diverse venues which promises broader exposure as they develop their skills and our higher-level fighters will now have the opportunity to compete in top tier promotions more quickly. We truly believe this is the future of the sport.”