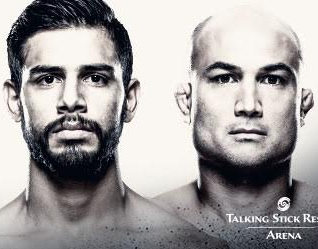 BJ Penn is back – again. This time he is fighting at 145 pounds at UFC Fight Night 103 against a beast of an opponent in Yair Rodriguez. He has a few factors working hard against his success.

None of those points resonate with Penn obviously because he’s back again despite retiring for what seemed like at least a dozen times. It wasn’t, but with all of the should he or shouldn’t he conversations it was hard to tell if he really was. Now, he says he’s on his way to a third title upon this return. Penn told MMA Fighting:

The third title is also 100 percent driving me. Getting those three titles in three different weight classes, that would just be an awesome accomplishment for myself, and then I could probably get some sleep at night. That is my driving factor.

There are virtually no fans who believe he can work his way successfully through the tough competition at 145 pounds and then dethrone now champ Jose Aldo. If they do believe that check to see if they are high. With that being said there are many who would love to see the Hawaiian make a comeback and secure a championship in a third division. The first two he won were at lightweight and welterweight instantly making him the legend he is today. If he were to capture the featherweight belt it would be pandemonium.

Penn admitted he should have not come back so soon to face Frankie Edgar in 2014. He wasn’t mentally or physically prepared if you believe the reports. I guess we’ll have to wait and see if he was right in coming back now.