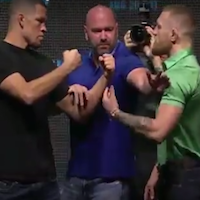 Conor McGregor takes on Nate Diaz this weekend and his trash talk has diminished making way for real conversation. At a recent UFC 202 Q & A in a bare bones gym, from appearances, he briefly touched on his struggle with media obligations and his desire for his own official UFC gym.

One of the battles I’ve had with UFC, the ongoing battle, is the media obligations. Obviously I was pulled from 200 over it, but they came back with a load of new ones and I was like, ‘Look, I’ll do a certain amount of stuff but I want the gym. Hook me up a gym.’ We went back and forth and that didn’t happen, and then the UFC GYM people, which are separate to the UFC, they said they would build a gym for me. They built this gym up, I sourced the location for it, but they built it like within a day.

The gym was constructed very, very quickly in Las Vegas for Conor and he wasted no time talking about bringing his own UFC Gyms to Europe.

This could be the start of a relationship with the UFC GYM. Maybe I will take the European rights and bring the UFC gyms all across Europe. We’ll see. We’re in current talks with that, but I am grateful for their help in this one.

If he loses to Nate Diaz would anyone even train at them? Appearances are everything and no one wants to train with a loser even if he is the UFC 145 pound champion, right? I would.