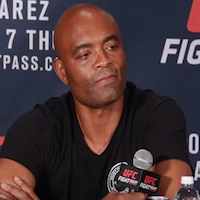 Dana White said Dan Henderson and Gegard Mousasi called him and wanted a shot at UFC light heavyweight champ Daniel Cormier after Jon Jones was pulled from their UFC 200 headlining title bout on just three days notice. However, it was former middleweight king Anderson Silva who also called the UFC President and ultimately was chosen to face Cormier in a 205-pound non-title bout on the card — on three days notice!!! That’s balls my friend.

White said Anderson had gall-bladder surgery a couple months ago and had not done any medicals. Somehow the UFC staff was able to pull off getting all his medicals done on such short notice and “The Spider” will now test his skills against Cormier, one of the pound-for-pound best in the world. A younger version of Anderson was himself once king of the pound-for-pound list and displayed spontaneously orchestrated violence reminiscent of one performing freestyle ballet with a sniper rifle in the middle of a war zone.

Arguably, this is a more fun match-up than the Jon Jones vs. Daniel Cormier rematch for UFC 200. The oddsmakers aren’t giving Anderson much of a chance against Cormier, but with his reach and movement, along with his trademark striking, Anderson could pose trouble for the Olympian. We do know Anderson can be put on his back and held there by wrestlers, but who the heck wants to watch that?

Here’s the full presser for the Anderson Silva at UFC 200 announcement.