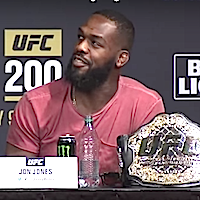 DAMMMITTT YOU MMA GODS!!! Jon Jones is out of his UFC 200 main event championship rematch with Daniel Cormier due to a “potential” USADA anti-doping violation.

UFC was notified that USADA has flagged Jon Jones for a potential anti-doping policy violation.

There’s no word yet on what the banned substance was, though the “tainted supplement” defense has been gaining a lot of popularity lately.

Mark Hunt vs. Brock Lesnar will now serve as the main event for UFC 200.

Dana White announces that the new main event for #UFC200 is Mark Hunt vs. Brock Lesnar

How crazy is it that Brock Lesnar is main eventing one of the biggest cards in MMA history, and just a few months ago his return to the UFC wasn’t even fathomable? Fate has her own story to write and clearly is not concerned with Jones reclaiming the title he never lost. At least not now.

Cormier says he would still like to fight at UFC 200 if they can find an opponent. Anyone want a shot at the arguably number two pound-for-pound fighter on the planet and the UFC light heavyweight title on two days notice?

More on this breaking news below.

Dana White found out within the last couple of hours. Hasn't spoken to Jon Jones or his camp since then#UFC200

Dana White says this is devastating for Daniel Cormier. In every way possible it could be.#UFC200

Dana White says, for Daniel Cormier's sake, he would like to get him a fight so he can have the pay day that is #UFC200.

The fallout for this is massive. So many UFC people are impacted. All show formats for tomorrow and Friday have to be re-worked now. Uncle.

Stay tuned for more updates on this developing story.