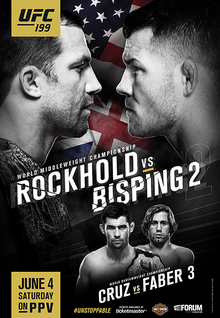 There’s a slew of good fights on the UFC 199 card and you can check out the betting odds here. Looking to watch the UFC 199 PPV live stream online?

Pro MMA Now will provide live results and round-by-round updates throughout the evening. Join us and share your thoughts on the fights in the comments section should you feel so inclined. Thanks for reading.

Round 1 – Amazing round with both guys laying it on the line and not holding back. Reyes probably won the round as he dropped Kim, but both guys landed some big shots with a high pace.

Round 2 – More complete abandon from both guys and it’s turned into a bloodbath. Reyes ends the round on top landing ground and pound. Joe Rogan describes it “as one of the most insane fights” he’s ever seen in his life.

Round 3 – Reyes drops Kim with a right then lands two more to finish him off. These guys deserve some big bonus money as they took a few years off their life to entertain the crowd in this one.

Round 1 – Casey scores a takedown early and controls the action from top. Mutapcic gets back up before the round ends. Nothing too significant.

Round 2 – Casey with some leg kicks. He gets a takedown but Mutapcic back up with some heavy knees to the body. Casey with another takedown and gets to full mount with plenty of time left. Mutapcic escapes to his feet eventually and lands elbows in the clinch.

Round 3 – Casey takes some hard shots on the feet and goes for a takedown but Mutapcic gets a reversal on the way down and gets Casey mounted before the bell and ends the round landing some big shots.

Round 2 – Da Silva landed some good combos but Wilson came back with a takedown, then big punches that dropped da Silva after that.  Da Silva gets a takedown of his own and gets full mount, taking hard shots. Finally the ref is forced to stop it due to punches.

Round 1 – Back and forth standup, nothing too significant. No deep engagements.

Round 2 – Some decent exchanges, Breese seemed to land the harder shots.

Round 1 – Caceres drops Miller early with a straight left. Miller right back up and clinches with him against the cage, then uses it to score a bodylock takedown. Caceres escapes to his feet but Miller jumps on him and drags him back down looking for the back. Caceres spins and ends up on top. He stands and lets Miller up. Alex teeing off on the feet. But Miller still coming forward. Alex has him in trouble with punches and avoids Miller trying to clinch. Alex dumps in after catching a leg, lands a couple shots and lets him up. Caceres took the fight on 10 days notice. He goes back to working Miller on the feet. Nice punch/kick combos from Alex and scores a takedown in the final seconds.  10-9 for Alex.

Round 2 – Alex back to the impressive standup and dumps Miller on the ground but lets him up. He pushes him to the ground again during a clinch. Nice body kick and right hand from Alex. Some good head movement too. Lovely punch combos from Bruce Leeroy. Alex throws him down again and lands a right. Lets him up. Cole’s nose is busted up. 10-9 Caceres.

Round 3 – Alex with a slam after Cole tries to clinch. Cole with a takedown after he gets up, Locks up an armbar on Alex after taking his back, somehow Alex slips out and gets on top. Alex stands up and lets him up. Cole landing some punches now as they clinch. Cole tries to pull guard but Alex just throws him down. Back up and clinched with 90 seconds to go. Alex backs out and lands a nice left. Another, and an uppercut. They go to the ground and Miller ends up on top in half guard but only 30 seconds to go. Miller gets on his back and gets mount before the bell. Alex should win this fight but probably lost that round.

Round 1 – Andrade with the big power advantage on the feet and is lighting Penne up with big punch combos, backing her against the cage. Andrade really busting her up as the round closes, Penne goes down and just barely survives. 10-8 Andrade.

Round 2 – Andrade continues the punch abuse and swarms her as Penne begins to wilt. The battering is brutal and probably stopped about 20 punches later than need be. Penne’s just at a huge disadvantage on the feet. I don’t think Penne landed a punch in the fight, not one I recall anyway.

Round 1 – Beneil takes a poke to the eye early and timeout is called. He takes another poke and another timeout is called. Dariush lands some nice body kicks and drops Vick with a big punch. He toes for the finish but a bloody Vick makes his way back to his feet as Beneil pushes him to the cage and works from the clinch. Dariush wobbles Vick badly with punches. Vick tries to hang on but Dariush finishes him off with a final counter left punch that shuts the lights out.

Round 1 – Guida lands the first punches then drops Ortega with a left hook. He gets right up. Guida staying poised. Big overhand right from Guida. Guida lands more good punches as Ortega tries to stay on the outside. 10-9 for The Carpenter.

Round 2 – Nice uppercut from Ortega as Guida tries to get inside. Ortega looking better in this round so far. Nice quick left hook from Guida as he gets inside. Ortega with a couple good kicks to the body so far in this round. High kick from Guida. Check left from Ortega. Guida attempts a takedown but lets it go as Ortega goes for his neck. Guida’s hands looking good as is his head movement and footwork. Clay ducks into a lead uppercut and Ortega scores with a spinning back kick to the body. Guida 10-9.

Round 3 – Check left from Ortega as he comes out faster this round. Nice jab as he circles and stays on the outside. Ortega using his length to his advantage now. Spinning back kick to the body from Ortega and Clay returns with an overhand right. Ortega turns it up in the final minute and Clay ducks into a knee that puts him out.

Round 1 – Green gets dropped early with punches. Poirier tries to finish, he somehow survives and gets to his feet but is getting worked. He’s still in there for now but is taking damage. Green gets dropped again and Poirier dives in with a big right for the finishing blow and a few hammerfists for good measure.

Round 1 – Nice inside leg kick from Hendo. Again. Hector misses with a counter right hook as Hendo ducks. Nice straight right from Hendo momentarily stops Hector’s advance. Dan hurts Hector with a right but as he goes in Hector lands a hard shot, then takes him down, looks for a kimura but Hendo escapes it. Hector in side mount, he gets up, eats a knee then gets dropped by Hector. Hector going for the kill. Dan gets up and is trying to survive. Hector takes him back down with 60 seconds to go. Wow! He survives the round with full guard.

Round 2 – Doctor checks Dan out before the round starts. Low kick from Hendo. Again. Body kick from Lombard. Hard right from Dan. Lombard stops the footwork and is standing still now, fully planted. Check right hook from Lombard. Dan lands a high kick that stuns Lombard, Lombard catches the kick but Dan clips him with a backward elbow that puts Lombard down, then Dan lands another elbow that puts Lombard out cold!! OMG!! Dan Henderson 45-years-young!!

Round 1 – Holloway seems to have Lamas’s number as this fight gets going, teeing off with strikes and confusing Lamas. Lamas goes for a takedown but is unable to complete it. Wheel kick from Lamas. Another one but from Holloway this time.

Round 2 – They get into a firefight about halfway through the round, Holloway landing some hard fast shots but then Lamas starts landing. Holloway with a takedown and knee to the body. Lamas gets up with 90 seconds to go, right hook from Holloway. Holloway gets Lamas’s back during a scramble. Softening him up with 20 seconds to go. Lamas survives but eats a big elbow and hammerfist. Holloway 10-9.

Round 3 – Holloway’s hands looking so crisp and fast tonight. Lamas with the occasional low kick but Holloway definitely getting the better of the boxing. Max swarms with punches but Lamas survives. They slug it out blow for blow for the last 10-15 seconds. Amazing. Holloway should take it.

Round 1 – Cruz gets a takedown early. Faber goes to sweep but Cruz gets the advantage. Faber’s pants almost fell off. Hard inside kick from Cruz. Faber drives in for a big slam but Cruz rolls with it and ends up on top. Faber gets the ankle and lands a big punch as they get up. Faber looking for a guillotine briefly. Faber stuffs a takedown. Cruz’s footwork looks a bit limited tonight and his left ankle is wrapped. Faber may have gotten that round.

Round 2 – Cruz drops Faber with a big left hand. But Faber lands an up kick as Cruz rushes in. Faber gets up and is shaky as Cruz pursues. Cruz stuffs a takedown and lands a couple big shots. Faber looks to have mostly recovered. Hard leg kick from Cruz. He continues to take deep breaths but that’s normal for Cruz. Hard leg kick from Cruz again.

Round 3 – Cruz buckles Faber with a leg kick and lands an overhand left. Faber’s footwork looking pretty good, switching stances now and then. Faber lands a right and Cruz lands one back. Inside leg kick and couple big punches from Cruz. Another inside leg kick. Big left hook from Cruz. Nice punch combo from Cruz. Cruz continues to outstrike Faber, he bumps into him after the bell and Faber pushes him.

Round 4 – Nice right from Cruz, he drops Faber with a combo but he somehow gets back up. Faber looks outclassed at this point. Cruz shakes his hand out, could be injured. Faber with a right.

Round 5 – Faber trying to get more aggressive this round but Cruz is rarely there to be hit. Cruz with a takedown with about a minute left but Faber is back up after almost losing his shorts again. They give a half hug after the fight.

Round 1 – Rockhold looks like a ballerina. That’s how fluid his movement is. That’s from skateboarding, alot of what you see there comes from the balance you get in skating/surfing. Bisping holding his own so far. And holy crap Bisping knocks him out with punches. It’s the New Moon by the way. That means chaos reigns. And it was a big left hook that put him out.

We have a new middleweight champ folks. Michael Bisping. Did you ever see that one coming? Faith can move mountains my friends.