Did you know Thomas Almeida is 21-0, was the former Legacy FC bantamweight champ and is 4-0 inside the UFC Octagon? He’s also won performance bonuses in all those UFC fights and he’s knocked out his last three opponents in a row — most recently Anthony Birchak in November.

This is a serious dude guys and very likely a future UFC champion.

Here’s another stat for you. In 21 wins Almeida’s only gone the distance ONCE. He has 16 wins by knockout and 4 by submission. The 24-year-old Brazilian “Terminator’s” favorite technique is his signature Tomahawk liver punch. Don’t say we didn’t warn you.

Currently ranked No. 7 at bantamweight, another impressive win for Almeida, especially in the main event, should put him right in the mix for a title shot. We were able to catch up with Thomas before his upcoming fight thanks to his manager Wade Hampel of Big Fight Management.

You are scheduled to fight UFC Las Vegas, do you train year around, or are you starting your camp now?

Yes big challenge for me. It’s gonna put my career in the next level. I’ve been training hard since the first day of 2016, waiting for my next fight, but now I have more focus since the fight was secured.

Cody has boxing background. He has powerful hands and he likes the striking game like myself, so it’s gonna be a war.

I’m training all areas boxing , BJJ, wrestling and Muay Thai. I’m in preparation to become the champion. I have to improve all my skills. And I’m training hard my cardio to prepare for 5×5 minutes rounds.

My training partners are Felipe Arantes, Lucas Martins, Allan Nascimento and others greats fighters of Chute Boxe – Diego Lima gym. I do my wrestling training with Willian Naim, BJJ with Barbosa B9 team and my strength and conditioning with coach Val Dias.

Vegas is the venue of fight, all the greats fights happen there so. I’ve fought there before and I loved it!

What do you NOT like about fighting outside of Brazil?

I have nothing negative to say about it. I just wanna fight, doesn’t matter where. Have a fight, it’s what make me happy.

This is a main event fight, with a win do you think your next fight is for the title?

I don’t think so. Cody is a great challenge for me, so my mind is completely focus on it.

Thanks Thomas. Anyone you want to thank or shoutout?

I want to thank my entire team of Chute Boxe, my friends my fans and all my sponsors for always support me.

Check out Almeida’s destruction of Anthony Birchak from November: 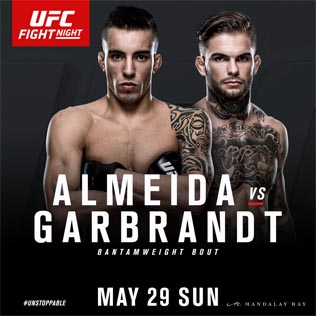