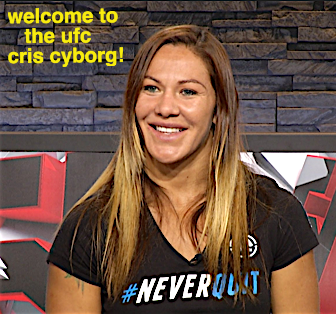 Stop the motherf*ckin presses. Cristiane “Cyborg” Justino (15-1, 1 NC) will finally make her long-awaited UFC debut on May 14th when she faces Leslie “The Peacemaker” Smith (8-6-1) on the UFC 198 undercard. The two ladies will meet at a catchweight of 140-pounds.

Cyborg is the former Strikeforce featherweight champ and the current Invicta FC featherweight champ. The 30-year-old Chute Boxe veteran hasn’t seen defeat since her pro debut in 2005 and has finished every opponent she’s faced since 2008 by knockout. Cyborg last fought in January when she stopped Daria Ibragimova with punches in the first round. It was her third title defense as Invicta’s 145-pound champ.

Smith is coming off a three-round unanimous decision win over Rin Nakai earlier this month and is 2-2 inside the UFC Octagon at bantamweight.

Fabrico Werdum will defend his heavyweight title against Stipe Miocic in the UFC 198 main event. Here’s the full line-up for this incredibly stacked card following the addition of Cyborg vs. Smith: