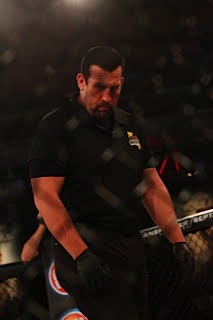 Long time MMA referee “Big” John McCarthy is one of the best referee’s in the history of MMA, reffing some of the biggest fights in MMA history. He has a hashtag movement on Twitter called “#AskBJM” where he’ll answer questions from people on Twitter and it’s quite good. He recently was asked a question regarding taking points for intentional fouls. See the exchange below:

If we freely took points 4 any foul, we would be altering outcomes continuously & people would be outraged #AskBJM https://t.co/QRHg0nQ8ra — Big John McCarthy (@JohnMcCarthyMMA) January 21, 2016

I think the question could have been towards a situation in  recent fights were fighters grabbed the cage multiple times to avoid being taken down. I agree that freely taking points for any foul would be altering outcomes continuously. However, fighters know beforehand that it is illegal to grab the cage and they are given instructions prior to each fight. If referees would brief fighters on how they are going to call fouls (and they probably do but don’t heavily enforce it) and that they will be penalized after ONE verbal warning, I think that could deter fighters from doing things repeatedly. I think if referees are consistent with a verbal warning for the first offense stating they will take a point on the next offense, then it will be on the fighter if they decide to commit the illegal foul again. It would be the fighter altering his own outcome, moreso than the referee, because the fighter did not abide by the warning issued by the referee.

I’m aware that not all fouls are intentional, but fighters get away with numerous violations without penalty far too much that also alter the outcomes in fights. So who is really being penalized?