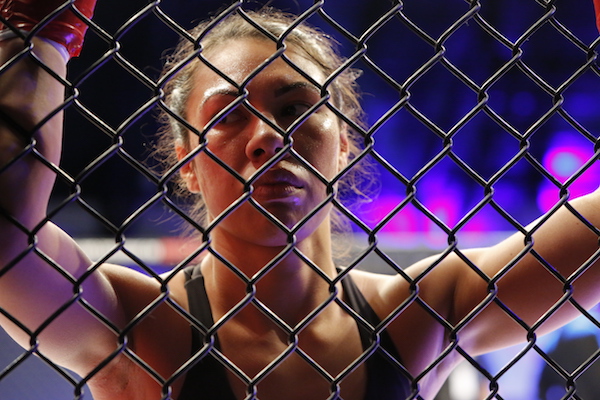 It was “Changes” authored by the legendary departed pop star David Bowie, which became Invicta FC 15‘s theme of the night. The evening’s card featured Champion Cristiane “Cyborg” Justino who would defend her title against Russian M-1 Champion Daria Ibragimova. The event was originally planned to feature Cyborg dropping to a lower weight but it was later changed based on Cyborg’s decision in remaining at 145 where she would successfully defend her strap through a TKO in round 1 at the 4:58 mark. Bowiesque changes prophetically affected the majority of Invicta’s schedule as well as each bout on its Title Fight card.

The co-main event featured an Invicta FC Strawweight Championship bout with champion Livia Renata Souza defending her title against undefeated challenger DeAnna Bennett.  Souza was originally scheduled to face Alexa Grasso, but an injury in training sidelined Grasso and the Champ’s opponent was changed to Bennett. A native of Orem, Utah, Bennett came into the fight with an impressive 8-0 winning streak until she encountered the brutality of Souza who easily dispensed of the assassinator in round one.

Raquel Pa’aluhi was on schedule to fight Irene Aldana but her opponent was changed to Colleen Schneider who defeated the Las Vegas fighter Pa’aluhi via split decision. There was even “Overkill” changes with Alliance MMA fighter Angela Hill who was originally scheduled to fight Jodie Esquibel, but Esquibel was ultimately shelved and replaced by Alida Gray who was knocked out by way of heavy artillery strikes in Round 1.

More changes as Amber Brown was at one point scheduled to square off against Lisa Ellis, while Alliance’s Christine Stanley was scheduled to fight her first opponent Shannon Sinn. But both Ellis and Sinn, whose fate was in the stars, pulled out with late changes and were replaced by Katy Collins and Shino VanHoose. Two days later, it was Katy Collins who also pulled out due to a training injury which led to her fight with Christine Stanley finally being dropped after many unsuccessful attempts for a match to be added to the Invicta card.

A fight between Ediane Gomes and Amanda Bell was also scheduled but was scratched the day before the event after Gomes suffered dehydration complications with her severe loss of weight. Even the scheduled dates for the Invicta FC 15 card went through changes as its schedule was first planned for November, then December before finally being booked for January at the OC Hanger.

Time to face the Changes…