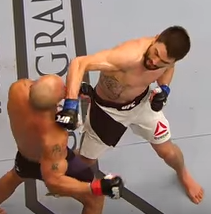 Robbie Lawler retained his UFC welterweight title after a five-round split-decision win over Carlos Condit in the UFC 195 main event over the weekend. The two threw down in what was one of the best 170-pound championship matches in UFC history. It was Robbie’s power against Condit’s vast aresenal of strikes. Both fighters got knocked down during the fight but in the end the judges gave the nod to Lawler. Here’s how we had it scored. What about you?