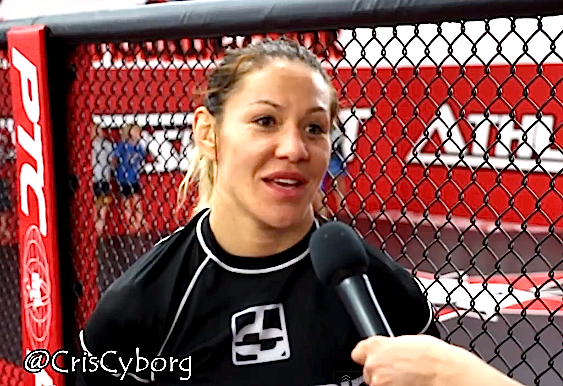 It’s no secret that Cris Cyborg not being in the UFC has frustrated die hard fans for what feels like forever. Cyborg’s constant bombardment to Ronda Rousey’s fighting prowess is now the stuff of legend. Even though Rousey got knocked out by Holly Holm the fight between the two us ridiculously marketable and would surely make a lot of money. So why has Cris not made her UFC debut? Shannon Knapp opened up about the delay.

I provide a platform she performs on, but those are conversations for her and the UFC. I’m supportive of whatever those decisions will be and do what I can to help make happen whatever direction they want to go.

To be honest with you, it’s not really my decision on any level. Cris is a UFC-signed athlete. Any discussions pertaining to her future pertaining to Ronda or dropping down in weight is really between (her and the UFC)…

It’s only a matter of time before Cris steps in to the Octagon – or is it. Can she make 135 and stay there? What happens if she makes 135, takes the belt, and then misses weight repeatedly? That would stir up troubles for Dana White. No matter who took the belt after her it would be considered illegitimate, a paper champion would be crowned. Not as bad as when GSP vacated his and let the other hungry welterweights get the scraps, but bad. There would be constant reminders from fans that Cyborg is their GOAT and we would never hear the end of it.

The other option would be for White to create a 145 pound division for her and let her rule there. A super fight between Holm and her would make a lot of money using the champion vs. champion marketing tactic. I don’t see that happening.

What do you think? Will we ever see her in the UFC? Will they create a 145 pound division for her?