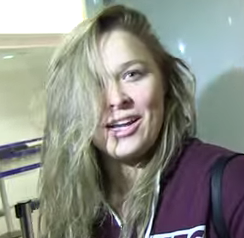 Ronda Rousey is back from her date to that Marine Corps Ball she was invited to earlier this year by 22-year-old U.S. Marine Jarrod Haschert. It was the first big outing for the former UFC women’s bantamweight champ since her devastating head kick knockout loss to Holly Holm at UFC 193 last month.

TMZ cameras caught up with Ronda at the airport as she arrived back in L.A. She said the guy was a “real gentleman” and a “real sweetheart” and it was “the only smiling” she has been doing.. Ronda said she didn’t dance at the Ball, and her understanding boyfriend UFC heavyweight Travis Browne was cool with her going.

Thank you Lance Cpl. Jarrod Haschert for taking me to the Marine Corps Ball, being such a gentleman, and putting a smile on my face again ??