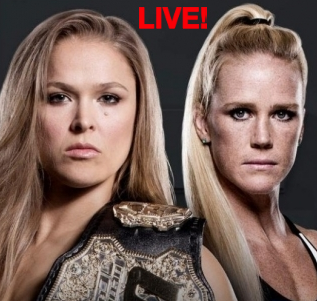 Reigning unbeaten UFC women’s bantamweight champion Ronda Rousey steps back into the Octagon this evening as she faces rangy kickboxer Holly Holm in the UFC 193 main event. Women’s strawweight champ Joanna Jedrzejczyk puts her title on the line against Valerie Letourneau in the co-headliner.

UFC 193 is the first ever UFC Pay-Per-View headlined with two female championship bouts. The historic event will take place in front of 70,000 fans at Etihad Stadium in Melbourne, Australia.

If you’re looking for a live online stream for UFC 193, you can order the Pay-Per-View online at www.ufc.tv/events for $59.99. The early prelims will stream live on the UFC’s Fight Pass subscription service ($9.99/month).

Round 1 – Nguyen comes close to getting a rear-naked choke after hurting Benoit with a head kick and strikes. After a scramble Nguyen locks in the choke again, this time deeper and Benoit taps.

Round 1 – Moontasri with some nice quick kicks low and high. Overhand right from Zafir and ends up with a takedown. Moontasri makes his way up but Zafir keeps him against the cage for a time. Moontasri gets some distance with about 90 seconds left. He lands a spinning back kick to the ribs, then a spinning backfist and Zafir goes down hard. Moontasri follows up with punches as the ref stops it. Beautiful finish.

Round 1 – Low kick from Walsh, putting on the pressure and backing Kennedy up. Hard low kicks from Walsh slowing Kennedy down. Overhand right and Kennedy stumbles, Walsh smells blood but is being patient. Back to the pressure from Walsh, Kennedy covers up as Walsh tees off. He’s okay for now. Low kick from Walsh. Big left. Right from Kennedy. Flails on a spin kick attempt. His legs are super bruised up. Takedown from Kennedy, he gets on Walsh’s back but no hooks in and Walsh gets up but Kennedy stays on him and drags him back down, hooks in now as Walsh fights off the choke. Kennedy ends up in full mount after Walsh escaped the choke. Round ends with Kennedy on top in half guard. 10-9 Walsh.

Round 2 – Walsh connecting with punches and low kicks early. Kennedy shoots, sprawl from Walsh. Kennedy tries pulling guard. Walsh lets him up. Kennedy goes for another takedown, there’s a brief scramble and it’s back up. Walsh tags him and Kennedy tries pulling guard again. Walsh stacks him with punches. He finally lets him up. Kennedy with a takedown, inside full guard. Kennedy stays just busy enough to keep it on the ground the rest of the round, never going outside full guard. 10-9 Walsh.

Round 3 – Body kick from Kennedy. Another, then a low kick. Low kick from Walsh. Couple nice rights from Kennedy. Walsh goes low again. Then lands a solid right and Kennedy just fades to the ground and lets Walsh get back control. Kennedy gets to his feet, lands a body kick. Another right from Walsh, Kennedy shoots, stuffed. Ref lets him up. Couple kicks and an uppercut from Kennedy. Walsh stuffs a takedown as Kennedy tries pulling guard. Walsh stacks him, tries kicking the legs. Ref has seen enough and stands Kennedy up. Walsh attacks with punches. Kennedy shoots and misses. Flops to his back again, eats a big right from Walsh. A left. Walsh tries to pour it on before the bell as Kennedy looks for a leg. 10-9 Walsh.

Round 1 – Kelly pressuring, looking to get inside, lands a big left. Knee to the body from Montgomery. Body kick from Montgomery, he slips, back up. Big left from Kelly, he comes in swinging. Clinch, judo throw from Kelly and he unloads elbows from on top in half guard. Montgomery gets to his feet, tries tying up with Kelly again and gets tossed to the ground again. Kelly  gets on his back, looks for the choke, moves to mount, now Kelly landing ground and pound from inside guard. Montgomery gets up for about one second before getting put right back down. Kelly looks for a choke but is unable to secure it. 10-9 Kelly.

Round 3 – Vaculik with the early takedown but can’t keep him there. Takedown from Martinez but he can’t keep Vaculik down. Vaculik with the pressure, landing punches but gets taken down again. Elbows from Richie to the side of the head as Martinez tries to hold him down and succeeds for much of the rest of the round. Vaculik gets up in the final seconds but it’s too late. Martinez 10-9.

Round 1 – Villante stuns Perosh with a right hand. He remains patient. Lands a head kick on Perosh. Villante hurts him with punches. He’s busted up now but still maintaining. Front kick from Villante. Body kick. A perfect right hand on the button and Perosh drops face first. That’s it.

Round 1 – Front kick from Noke. Again. Sobotta looks for a takedown but is pushed away. Body kick from Sobotta. Jab, front leg kick from Noke, another leg kick. Right from Sobotta, low kick. Hard front kick from Noke to the body and Sobotta screams out as he falls down holding his mid-section. Looks like a liver shot. Noke follows up with punches and the ref stops it. Brutal!

Round 1 – Left hand from Arreola. Body kick from Matthews, then a right hand. Inside low kick from Arreola. Low kick from Matthews. Clinch against the cage… the chants have started in the stands… they separate. Arreola connects with a left that catches Matthews shooting in. He’s hurt but recovers. Head kick from Arreola stuns him, he pounces and takes Matthews’ back, both hooks in. Matthews trying to shake him off. Arreola flattens him out, lands some hard punches, looking for the choke. Under a minute to go. Matthews finally shakes him off and unloads punches from the top, most are blocked. But he gets an elbow and a few through at the end. 10-9 Arreola.

Round 2 – Takedown from Matthews. He unloads elbows and punches that cut Arreola. He continues the ground and pound at a measured pace. This continues for the rest of the round and Arreola needs help getting to his stool. 10-8 Matthews. The doctor stops the fight after seeing Arreola’s swollen and cut eye. It really didn’t look that bad and Rogan said it wouldn’t have likely been stopped in Vegas. I concur.

Round 1 – Goldy keeps calling Rosholt “The Big Show”. Can’t imagine the WWE likes that. Knee to the body from Struve as Rosholt rushes in. Rosholt trying to stay on the outside, lands a kick to the thigh, body punch. Boos from the crowd. Struve looks so so much bigger. Rosholt times a kick for a takedown, takes side control. Rosholt stands over him, trying to pass back to side control, gets it and then Struve forces a scramble and Rosholt stands. Lays back in Struve’s guard. 10-9 Rosholt.

Round 2 – Right hand from Struve, front kick. Leg kick from Rosholt, he goes for a single leg. Struve defends and gets some space. Rosholt sets up a takedown, takes side control. Struve gets to his feet but Rosholt puts him right back down, taking side mount again. Rosholt stands up eats an up kick diving in. He’s okay it seems as he rests back inside full guard. Rosholt steps over to half guard, a mistake allows Struve to look for a submission, let it go, then land a couple elbows. 10-9 Rosholt.

Round 2 – Foot stomps from Whittaker. Jab from Hall. Whittaker returns same. Hall takes an eye poke. … Back at it. Replay shows it was a closed fist. Some good exchanges on the feet. Nice leaping in left from Whittaker. Low kick. Hall with a low kick, then a head kick right afterward. Whittaker eats it and seems okay though. Low kick from Whittaker. 10-9 Whittaker.

Round 1 – Here we go. Valerie catches a kick and dumps Joanna to the mat. Valerie dropping shots as Joanna works to get up, and she’s up, but Valerie still has her clinched up against the cage. Knee from Joanna. Valerie pressing her to the cage, but then backs out. Front kick to the face stuns Valerie. She turns away briefly. Clinch. Body kick on the break from Joanna. Front kick. Front kick again from Joanna, low kick. High kick from Valerie but Joanna fires back. 10-9 Joanna, but could have gone either way.

Round 1 – No abs on Rousey, but that’s normal. Great staredown. No touch from Ronda although Holly put her hands out. Ronda being patient on the outside. Flashing a jab. Holly tags her on the way in. Gets tagged again. Ronda chasing her now. Low kick from Holly. Ronda gets tagged again. Ronda chasing. Ronda lands a right. Ronda ties her up against he cage. Holy lands a right and a kick. Left hook from Ronda. Big step in left elbow from Holly. Ronda gets her tied up though and gets the takedown, goes for the arm but Holly escapes to her feet. Oblique kick from Holly. Another. Clinch, Holly escapes. Straight left from Holly. Holly just rocked her with a big left. She lands another, another. Knocks her mouthpiece out. Herb Dean stops it and puts it back in. Holly takes Ronda down, but then lets her right up. 30 seconds to go. Ronda chasing her and getting sloppy. Ronda Rousey is losing. 10-9 Holly Holm.

Round 2 – Straight left from Holly to start. Right from Ronda. Holly has her number. Side kick to the face from Holm. Left hand. Holly with the straight left, again, Ronda is staggered and Holly knocks her out with a head kick, then pounds her with like two or three more punches and it’s over and MMA history has been made. Believe it.