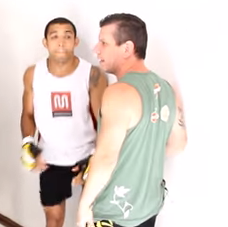 The UFC has a new featherweight champion after Irish superstar Conor McGregor (19-2) derailed long-reigning champ Jose Aldo (25-2) with a 13-second knockout in the UFC 194 main event over the weekend. Aldo had been on a nearly decade long winning streak and had never lost inside the UFC Octagon. He had seven successful title defenses prior to the fight with McGregor.

As is generally the case, when a champion falls there was a ton of negativity online about Aldo, and now his coach André Pederneiras of Nova Uniao has penned an open letter on Facebook reminding MMA fans why Aldo deserves your respect.

I have a deep sense of loss at this moment. Not only because of Jose Aldo’s belt, but mainly because of the lack of respect to our great champion, who maintained the UFC belt for four years and seven months, for seven fights (not counting his almost two years and three fights with the WEC title). I got back (to Brazil) and saw comments from people that certainly don’t know anything about fighting. And if they do, they never got anywhere, because those who achieved something in our sport know how hard is to compete at the highest level, against athletes from all over the world, and defeat them for many years.

When Brazil had no other champion, in a tense moment, Aldo maintained his title. After that, two other Brazilians joined him, maintaining the fame and recognition of the country in MMA. The only thing I ask everyone is respect to our great champion. For those who say it was fixed, I’d rather not comment, because they don’t deserve time and attention.

Last Saturday, Jose Aldo lost his belt in a fight in which he couldn’t show how well trained and prepared psychologically he was. There was no taunting that could enter his head, there was no technical failure, just an unusual blow. A blow like that, connecting in someone’s chin while moving forward, isn’t something that happens all the time. But it has happened with us. If it was the opposite, with McGregor being punched in the chin and Aldo in the eyebrow, we would be calling Aldo a superchampion today, the best of all times, but this is how sports are. Better luck for McGregor, who won and, therefore, is the new champion.

We need to understand that Jose Aldo is a human being subject to defeats, like any other. Those who show up criticizing him should think: this guy came from Manaus to Rio with nothing, to live in a gym, sleep on the mat, and wake up late so he wouldn’t starve since he had no money to have breakfast. He got where he were, always believing he would be a champion, and became one, due to hard work and dedication. The people’s champion.

Would those who are out there criticizing, talking about embarrassment, have the courage to do what he did? I bet not. If they did, they would know how hard is to win in a country where it’s rare to have support to sports. My message to critics is this: get up from the chair, get out from the computer, drop the phone, and do better. We need more people like Aldo and less critics from the couch.

The king has left, but will be back shortly.

Now check out this Jose Aldo highlight reel just to refresh your memory on why he was ranked as the number 1 pound-for-pound fighter prior to UFC 194.