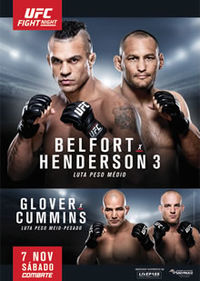 The UFC promotion returns after a couple weeks off with UFC Fight Night 77 on Saturday, November 7, in Sao Paulo, Brazil. The event will be headlined by the rubber-match between Vitor Belfort and Dan Henderson. The co-main event will feature a light heavyweight bout between former title challenger Glover Teixeira and Patrick Cummins.

The event will feature preliminary fights on the UFC Fight Pass subscription service, with the rest of the card airing on FOX Sports 1.

Belfort and Henderson first met at PRIDE 32 in 2006 with Henderson winning a unanimous decision. Belfort tested positive for elevated testosterone in which he served a nine month suspension and paid a fine of $10,000. They fought for a second time at UFC Fight Night 32 in 2013, with Belfort becoming the first fighter to hand Henderson a KO loss in his career with a headkick in the first round.

The UFC Fight Night 77 full card is below: