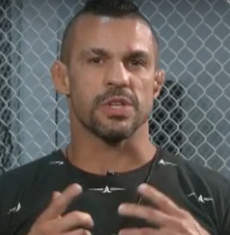 Vitor Belfort appeared on AXStv’s Inside MMA Friday night despite some tough questions. Belfort responded to the Deadspin article, saying he took the fight at UFC 152 on short notice and shared all of his information with the UFC and the athletic commission. He said he’s “not running away from the media” and claims he invited Ariel Helwani for a private interview and “he didn’t want to come”.

This of course comes on the heels of Monday’s The MMA Hour podcast where Helwani claims Belfort backed out of the interview at the last moment because he would not agree to stay away from certain topics… such as TRT. Jordan Breen wrote a very insightful piece on Belfort if you feel some sympathy for the guy, or buy into his “con” as Breen calls it.

“The Phenom” discusses returning to training post-TRT and thinks fighters are making excuses who blame their losses on him being on TRT (i.e. Bisping, Rockhold). … In attempt to be humorous, and it’s anything but, Belfort says he’s still on TRT, except that now it stands for “True Revival Touch”.