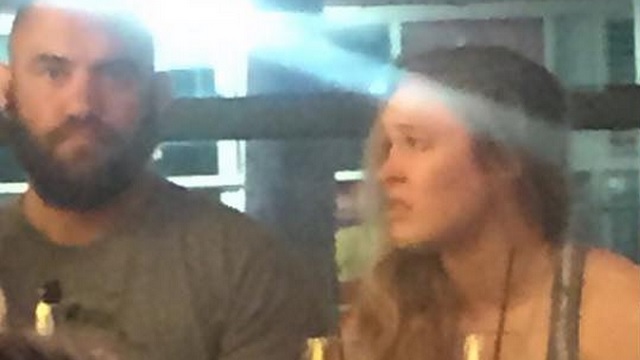 It seems odd that who a UFC fighter is or is not dating is considered news, but when your name is Ronda Rousey, it is — especially when your beau turns out to be UFC heavyweight Travis “Hapa” Browne, as he is married and was recently under investigation for domestic violence.

Browne’s wife, fitness model Jenna Renee, posted pictures of herself bruised on Instagram in August claiming Browne was the one responsible. Apparently she never filed charges though and an independent investigation done by the UFC turned up nothing.

Rumors of a relationship between Browne and Rousey were confirmed by Browne on The MMA Hour with Ariel Helwani this week. And now the UFC women’s bantamweight champion has also confirmed the relationship in a statement given to ESPN.

“I don’t talk about my personal life much. That’s why it’s called ‘personal life,'” Rousey stated. “It’s true that Travis and I are in a relationship. I’ve really enjoyed the time we have spent together and getting to know one another. And that’s all I’m going to say about it.”

Rousey has taken quite a bit of heat online for the relationship because of statements she made against Floyd Mayweather after she beat him out for a “Fighter of the Year” ESPY earlier this year. The female mixed martial arts champion made it clear she was taking a stand against domestic violence and although Browne has not been found guilty of any wrongdoing, unfortunately the court of public opinion doesn’t always need hard evidence to make their judgments.

The Daily Mail has several new pictures of the happy couple.

The news even made Entertainment Tonight.