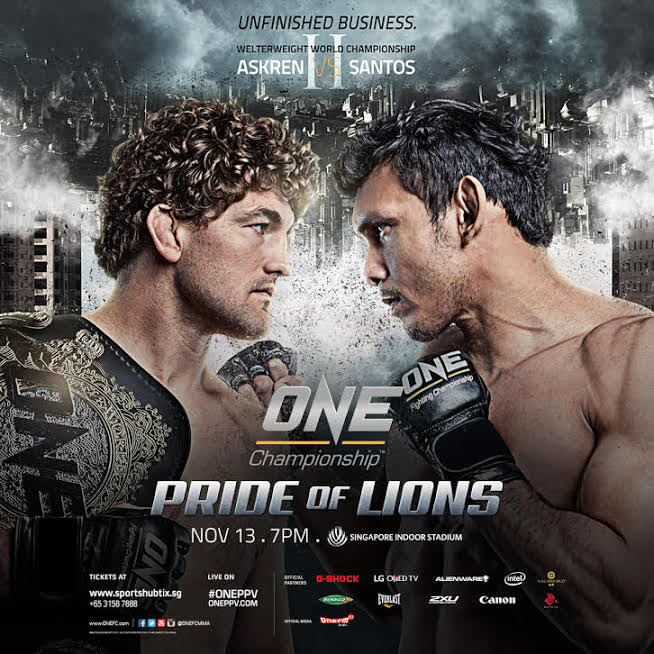 Luis “Sapo” Santos (61-9-1, 1 NC) will get his shot at the ONE Championship welterweight title once again when he faces 170-pound champ Ben Askren (14-0, 1 NC) in a rematch on Nov. 13 in Singapore. The 35-wins-by-knockout veteran had finished seven straight opponents leading up to his first fight with Askren in April when the bout was stopped at the 2:19 mark of round one due to an eye poke that left Sapo unable to continue.

The two will headline ONE: Pride of Lions from Singapore Indoor Stadium next month and three other bouts have also been announced for the card.

CEO of ONE Championship, Victor Cui, commented on the upcoming event and championship headliner. “Finally, ONE Championship is back home in Singapore with another exciting night of world-class MMA,” Cui stated. “Aside from the highly anticipated rematch between Ben Askren and Luis Santos, we have also prepared a few surprises for fight fans in the Lion City. Get ready for another amazing night of fights as ONE Championship broadcasts ONE: PRIDE OF LIONS live to fans all across the globe!”

ONE: Pride of Lions will stream live via online Pay-Per-View at www.oneppv.com on Nov. 13. Check local TV listings for the live global broadcast.

Watch highlights from Askren and Santos’ first fight below: