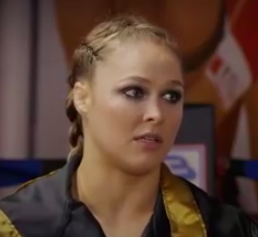 Sly Stallone called her “a natural” at acting. In this new 36-minute sit-down interview with RingTV UFC women’s bantamweight champ Ronda Rousey talks about her foray into film, her thoughts on being a role model, balancing acting and fighting and not falling victim to the “curse” of fighters who cross over into movies.

The Rowdy One also discusses how much longer she wants to keep fighting and her upcoming match with boxing champ turned MMA fighter Holly Holm. “I don’t think there’s such a thing as too soon,” Rousey says when it comes to whether she thinks Holm is too green for a title shot.

Ronda weighs in on headlining the upcoming UFC 193 card against Holm in November in Melbourne’s Etihad Stadium and if she thinks they can sell it out. The champ talks about a potential match against Floyd Mayweather, her favorite boxer, Mayweather’s I.V. scandal, Road House, weight-cutting, Cris Cyborg and much more.