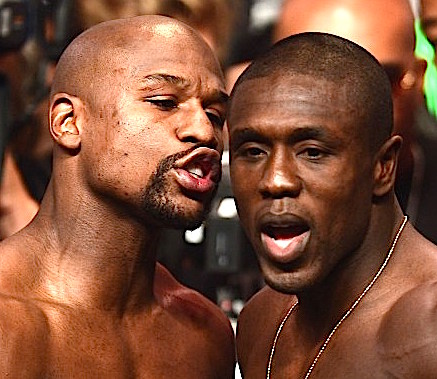 The Floyd Mayweather vs. Andre Berto pay-per-view card will begin tonight at 8 p.m. ET (5 p.m. PT) from MGM Grand Garden Arena in Las Vegas. Mayweather claims he will retire after this fight. ProMMAnow.com (www.prommanow.com) will provide live results of the entire card as well as live round-by-round updates of the main event between Mayweather and Berto.

NOTE: Here’s how to watch the Floyd Mayweather vs. Andre Berto pay-per-view via live online stream.

Round 1 – Floyd landing the jab to the head and body. Floyd’s hands pretty low. Clinch and several rights to the body from Mayweather while holding. Nice lead left hook from Floyd. 10-9 Floyd.

Round 2 – A closer round but Mayweather still got it.

Round 3 – These guys are throwing heat early. Berto pursuing, Mayweather making him miss. Mayweather had a little slip during an exchange; this gets a rise from the crowd who has been pretty silent. Short uppercut inside as Berto ducks into it. 10-9 Mayweather.

Round 4 – Berto gets Mayweather against the ropes, landing a good body shot and jab. Lead left hook from Mayweather followed by body shots in the clinch. Big right from Floyd stuns Berto. Berto backs him into the corner momentarily and seems okay.

Round 5 – Floyd being Floyd, avoiding almost everything Berto throws. 10-9 Mayweather.

Round 6 – Floyd landing jabs and body shots, avoiding Berto for the most part. Berto did land a good jab at one point. 10-9 Mayweather.

Round 7 – Berto was busier in this round, outscoring Mayweather 10-9.

Round 8 – Mayweather doing Mayweather. 10-9 for Money.

Round 9 – Finally seeing some real action in the last minute with both guys throwing down.

Round 10 – Berto using his jab effectively to back Floyd to the ropes. Lots of smack talking going on. Berto hunting. Referee warning the fighters to keep it clean and stop the chatter. Berto with the triple jab. Nice left hook from Floyd as Berto ducks in. Berto definitely being the aggressor though. 10-9 Berto.

Round 11 – Berto attacks causing Floyd to clinch. Nice left hook from Floyd. Berto touches him up with jabs. Body shots and a big combo off the break. Berto hunting for the last 30 seconds. Floyd showboating. Dancing. Floyd takes that round 10-9.

Round 12 – Berto trying to make something happen, but Mayweather is either gone when he gets there or ties him up. Berto gets him in the corner and connects, Floyd fires back as they exchange combos in the pocket. Nice short uppercuts from Floyd, he stuns Berto with under a minute to go. Nice uppercut from Floyd. Mayweather knows he’s won it and dances around the last several seconds. That should do it. 10-9 Mayweather.