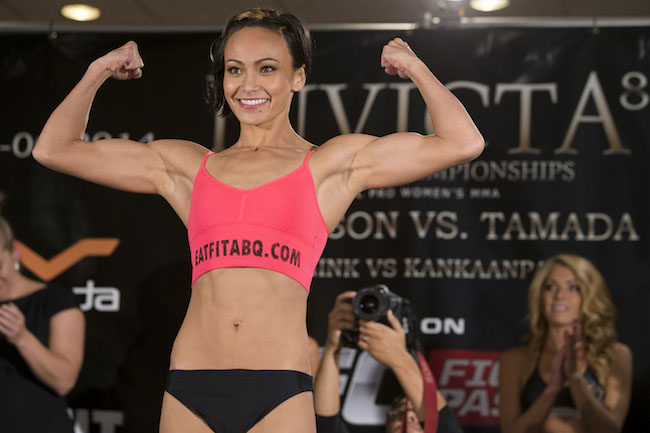 Michelle Waterson aka The Karate Hottie spoke to Submission Radio about the woman with the hardest name to spell Joanna Jedrzejczyk aka Joanna kjndns,mdngviowejnhtnmv when I try to spell it. Joanna is the UFC strawweight champion and has defended the belt once since winning it. Michelle is a former atomweight, one weight class below strawweight, and since moving to the UFC she made the jump up.

In this interview she talks about a rematch with Jessica Penne and potentially squaring off against Joanna.

On a rematch with Jessica Penne:

On whether she thinks she can beat Joanna in a striking heavy bout:

Of course, of course I do. No question about it.

Waterson is an accomplished fighter, but can she beat the woman some are calling the Jose Aldo of her division? She certainly has the tools and experience. Those things aren’t always enough when you face someone who is constantly trying to finish you and not win by safe decision as some have criticized GSP for.

Waterson debuted at The Ultimate Fighter 21 Finale against Angela Magana and she won the fight via submission in the third round. There is no doubting her well rounded game for sure. We just haven’t seen enough of her in the UFC to make a sound judgement call on her chances of becoming champ.