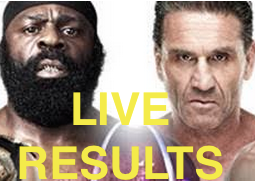 Bellator 138 takes place this evening from the Scottrade Center in St. Louis, Mo. and features a main event seven years in the making between street-fighting legend Kimbo Slice and MMA pioneer Ken Shamrock.

PMN will provide live results and round-by-round updates coinciding with the main card which will broadcast live on Spike TV starting at 9 p.m. ET / 6 p.m. PT.

In addition to the Kimbo vs. Shamrock main event, Bellator 138 also features the return of Bobby Lashley as he takes on late replacement Dan Charles, and a Featherweight Title match as champ Patricio Freire puts his belt on the line against Daniel Weichel.

Round 1 – Chandler getting off with his boxing and drops Campos with a right. Chandler goes for the finish. Campos looks for an armbar but keeps getting tagged and lets it go. He gets to his feet and lands a knee to the chin of Chandler. We got a fight. Chandler the better boxer. He suplexes Campos on his head, takes his back and locks in the choke. Campos taps out. Very nice performance for the hometown fighter.

Round 1 – Straus with an early takedown but Corrales is right back up. Straus trips Corrales back to the ground from the clinch. But once again Corrales is right back up and pressing Straus to the cage. A firefight ensues and Straus drops Corrales with a left, but he’s able to get back to his feet and stands toe to toe with Straus despite being visibly compromised. Straus scores another takedown in the final 30 seconds. Straus goes for a guillotine before the bell. 10-9 Straus.

Round 2 – After some back and forth on the feet Straus drops Corrales with a left hand, then takes his back. After bailing on a rear naked choke attempt, Straus eventually locks up a guillotine choke and Corrales taps out.

Round 2 – Another takedown from Lashley. Charles goes for a triangle but Lashley slams his way out. Lashley stays on Charles with the body lock and gets another suplex, landing some nice uppercuts from behind as Charles gets back up. Another suplex. Lashley landing some heavy punches to the side of the head. Charles gets back to his feet but Lashley never lets go. Another suplex. More punches. Ref wants to see something from Charles. Warning him. Big John finally stops it.

Round 1 – Weichel with a noticeable reach and height advantage. Pitbull with a nice uppercut and punch combo with about 2:50 left in the round. Pitbull with a solid one-two and Weichel fires back. Takedown from Weichel but Pitbull stands right up. At the 10 second mark Freire lets his guard down and Weichel tees off on him, lands a big knee to the chin and basically knocks him out. Bell sounds though and it will go to round 2. 10-9 Weichel.

Round 2 – Pitbull wobbly as they start. Weichel backs him to the cage with punches but Pitbull lands a counter left on the button and Weichel goes down hard and Pitbull follows up with one more big right and it’s over. Amazing!

Round 1 – Ken shoots right away. Stuffed, but Ken stays on him with an outside trip. Kimbo gets right up. Clinch, knee from Ken. They separate and Ken gets a takedown, takes Kimbo’s back and goes for the choke, it’s tight, Kimbo trying to peel it off and finally does and is back up. Kimbo tees off with punches and drops Ken with a right uppercut to the chin and it’s over as Big John intervenes. “I have evolved,” says Kimbo to the camera.