This is why we’ll be watching Kimbo Slice vs. Ken Shamrock at Bellator 138 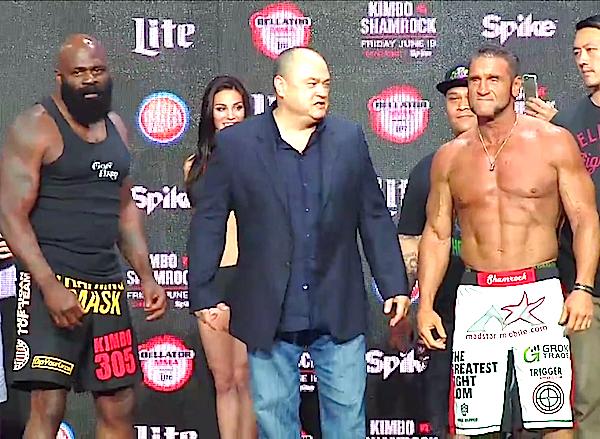 But the fight that will have most fans watching will, of course, be the main event between Kevin “Kimbo Slice” Ferguson and Ken Shamrock. Originally set to take place nearly seven years ago in the now-defunct Elite XC promotion, Slice and Shamrock once again get a main event status for what will likely be the highest watched fight that the Bellator promotion has seen.

In spite of the hype, Slice vs. Shamrock holds little relevance in the MMA world outside of a ratings boom for Bellator. Neither of these guys will be competing for a title any time soon (if ever), neither is at the top of his game, and I doubt there’s anyone out there who believes this will be a quality display of mixed martial arts.

Unless you’ve been living under a rock for the past ten years, you know that Slice gained fame as a YouTube sensation, a literal backyard brawler who was knocking out guys on a regular basis while a number of shaky-handed cameras filmed the action. Where Slice is a legend in the backyard, Shamrock became a legend in the cage (and ring). Shamrock, at 51 years of age, has been fighting professionally for just under twenty two years. Twenty two years. When Shamrock had his first recorded professional fight, Conor McGregor was four years old.

Shamrock, long-dubbed “The World’s Most Dangerous Man” enjoyed a lot of success in Pancrase, and was generally successful in the UFC when he wasn’t fighting someone named Royce Gracie. But a loss to Dan Severn at UFC 9 (you read that right – UFC 9 – keep in mind, UFC 188 was just last weekend) started the decline of Shamrock’s career, and since that time, he’s 6-11 in mixed martial arts competition, hasn’t beaten someone with a winning record since 2004, and hasn’t fought at all since November 2010.

Slice is 4-2 in professional mixed martial arts bouts, and also hasn’t been in the cage in over five years. Slice went 3-0 in his first three fights against three guys that there was little doubt he would beat, then ran into Seth Petruzelli as a late replacement for Ken Shamrock when Shamrock had to bow out of their first scheduled fight after getting a cut on his head hours before their fight. The suspicious circumstances of the cut aside, Petruzelli stepped in and defeated Kimbo in fourteen seconds.

Slice then made a run at the UFC after going through TUF, defeated Houston Alexander in a mostly boring decision at the TUF 10 finale, and then lost to fellow cast member Matt Mitrione in 2010. Someone new to the sport might be reading this and think “So these guys are the main event of a televised card? Why?”
Because of the hype. Like with nearly every other professional sport, ratings rule the day. Higher ratings mean more money, and cash is king.

This fight has so much hype behind it, Spike TV (the broadcasting network) even produced a one hour documentary about the fight. While the documentary had its interesting moments (Shamrock is living in an RV with no running water outside of his gym), the bulk of the documentary focused on the hype surrounding their first scheduled fight as justification for the “importance” of the second fight. Have any other Bellator fights ever gotten this type of documentary? Unfortunately not.

There was lots of talk of “breaking bones” and “pounding faces in”, amidst talk of Shamrock’s renewed sense of religion and clips of Slice’s backyard fights, and the buildup often seemed more reminiscent of a professional wrestling match rather than a mixed martial arts bout.

But despite all that – despite the fighters’ ages, despite their lack of fights in the last half-decade, despite any true relevance in current state of MMA affairs, many many people will be tuning in on Friday night to watch the fight. I will be. I want to see what sort of a freak show it is, whether Kimbo will be able to KO Shamrock before Shamrock can get ahold of one of Kimbo’s legs for a submission (the odds say the answer to that question will be a resounding yes), and lastly, whether their “beef” will suddenly be squashed after the fight as the two hug it out once the fight is over.

All that being said, I don’t mind the hype, and I don’t mind the fight happening. More viewers means more exposure for mixed martial arts, which translates into more money for the promotions, which eventually will trickle down to the fighters. The saying goes that there is no such thing as bad press, and while I don’t think that is true 100% of the time, it’s true here.

While the ratings numbers will undoubtedly peak during the night’s main event, there are going to be more than a few people watching the other televised fights, and there they will see a true display of mixed martial arts, and maybe, just maybe, some of those who are watching a televised MMA event for just the first or second time will decide to keep watching MMA once the hype from this event has died down. If they do, it’s a win.