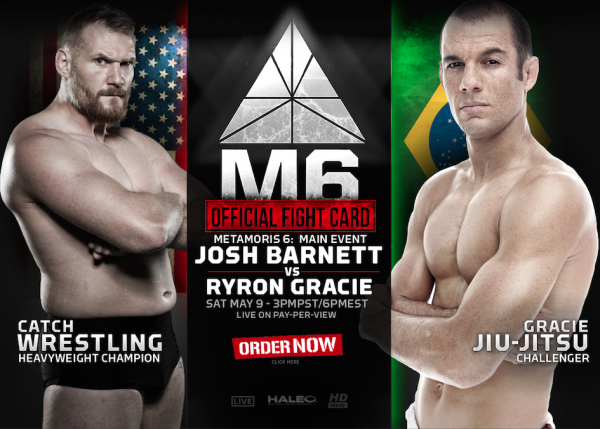 Metamoris will hold its sixth event somewhere tonight in Los Angeles, Calif. The venue is secretive-ish and not open to the public. It will be a private grappling affair with spectators only allowed via online Pay-Per-View. $29.99 is what you’ll pay if you order it. Luckily for you, we can just give you the results right here and you can save your hard earned money instead of giving it to those elitist forces at work here.

Josh Barnett makes his return to Metamoris after submitting the unsubmittable Dean Lister via neck crank last August at Metamoris 4. Barnett will face Ryron Gracie, who stepped up on short notice to take on the catch-wrestler in the main event after his original opponent was injured. The first PPV match is scheduled to begin at approximately 6 p.m. ET (3 p.m.) PT.

* As the Metamoris online stream begins there is already an issue. I’m wondering why I’m hearing Rener Gracie’s commentating being drowned out by one of the competitors’ cornerman. Why? Production should realize this is a terrible idea to have mics so close to the cornermen. How about no cornermen if you want to make it a sterile environment. No media is allowed at the venue and no spectators either. One can also witness cameramen moving around in the background. There are coaches hanging around the side of the mat watching. And there appears to be four percussionists on the side playing music for dramatic effect. This whole thing looks weird and seems strange but we’ll keep an open mind for the main card.

* Evandro Nunes replaced Jeff Monson against Jimmy Friedrich. The official story is that Monson had a family emergency and Nunes stepped up on one day notice. They fought to a draw.

* The last four 20 minute matches have gone to a draw and the time between matches is not short.

* Joe Lauzon had a few good moments, however Dillon Danis looked like he was on another level, taking and holding Lauzon’s back for quite a time, finally sinking in a D’arce causing Lauzon to tap.

* Video segment on Chael “The Bad Guy” Sonnen giving his “beat me if you can” promo. You’ve seen it.

* At least Metamoris is trying new things to enhance the grappling viewing experience. There are some kinks but I like where they’re going with this, maybe. When they can find their frame the camera angles really enhance the matches, giving viewers a number of angles to see exactly what’s going on with any particular move. (Random Thought: They should have one photo camera person outside the ring circling it and snapping photos of the match like paparazzi for dramatic effect. But he should be dressed in all black and move slowly.) :) Yes, I gave you a smiley during a serious BJJ match. Deal with it.

* Chael look swole. Some would say fat. Not me. I will not fat shame Chael. He was big. And it worked for him as he maintained top control much of the match.

* Josh Barnett vs. Ryron Gracie — This reminds me of a dream match between Royce Gracie and Brock Lesnar. Stays on the feet for the first minute. Trying to clinch up, grip fighting. This should favor Barnett you would think but the lanky Ryron is holding his own. Barnett decked out in his pro wrestling guard. They are all but punching each other. Rough play and Barnett scores a hard snap takedown and is on top in half guard. He’s BIG. He dominates from top and briefly gets to side mount. Goes for mount and Ryron creates a scramble by going for a leg. Barnett also goes for a foot and is able to transition to top inside Ryron’s guard. Ryron gets a high guard, dare a rubber guard? Hmmmmm… Barnett stays heavy on top and eventually they both go for each other’s legs in a north-south type position, but Barnett is able to lock on a toe hold and Ryron taps fairly quickly. Josh Barnett the BJJ killer? Who will rise to defeat the wrestling giant of the great North? Who will heed the call? Is it you? Until then The Warmaster remains the heavyweight grappling king.

One thought on “‘Metamoris 6: Barnett vs. Gracie’ live results and updates”