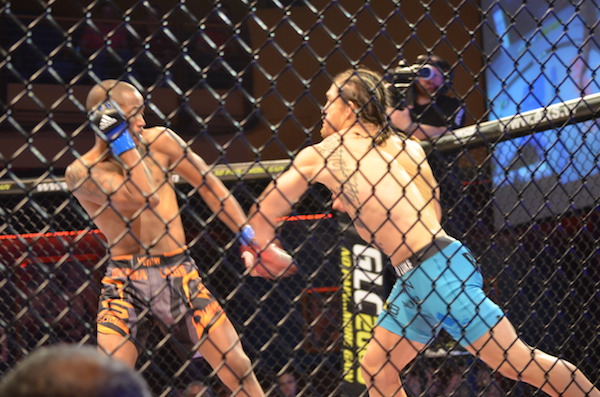 RFA and Legacy FC put on a promotion vs. promotion show on AXStv in Tunica, Miss. Friday night (May 8, 2015) with RFA winning three bouts and Legacy winning one. Sixteen fights in all filled the double-decker intimate venue inside the Horseshoe Casino. It was a great atmosphere for the event with plenty to do for those non-die-hard fans that might not want to sit through every single round of every single bout. A few minutes to spare? Go drop some dollars in the slots or find the poker machines in the very back. Or play the table games. Then hit the buffet, or the cafe at 2 a.m. like we did.

The main event was pretty epic as RFA fighter Alexandre Pantoja ended up submitting Legacy’s Damacio Page via triangle choke at the end of the second round. Literally it was the end of the round. The bell sounded and when Pantoja let go of the triangle choke and stood up Page was sleeping. Ref never saw it. Pantoja was the recipient of the inaugural AXStv Superfight Flyweight Title.

Luke Sanders successfully defended his RFA Bantamweight Title in the co-main event, winning a decisive five-round decision over the incredibly tough Terrion Ware, who just would not quit despite an eye swollen pretty much completely shut. And Ware never stopped trying to win, showing some nice kicks, quick hands and skillful boxing. Sanders’ pace, striking flurries, and well-roundedness allowed him to control the majority of the rounds with 50-45, 50-45, and 49-46 on the judges’ scorecards. He also looks to have broken his foot in the second round which makes the win even more impressive.

Highlights of the event are below courtesy AXStv and you can check the full “ASXtv: RFA vs. Legacy FC Superfight” round-by-round results here.