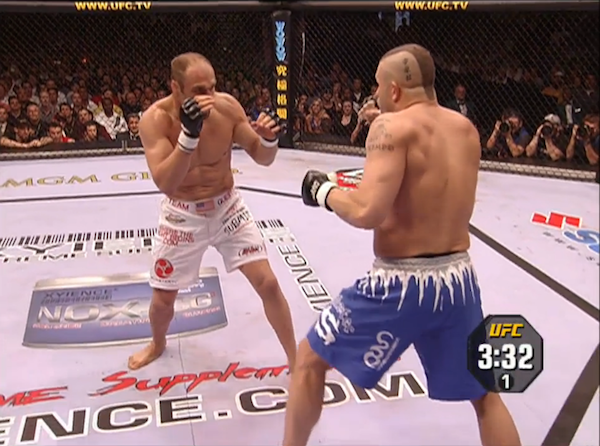 Everyone loves a rivalry. It’s what makes rivalries what they are no matter what the sport. Whether it be Tyson and Holyfield in the boxing ring or the Canadiens vs Bruins on the rink, things can get a little tasty. And in MMA it’s no different.

In fact in recent years we’re seeing more and more rematches which is leading to greater rivalries in the Octagon and with another full calendar to look forward to this year, we can expect a few more to develop.

But what are the sport’s greatest, and fiercest ever rivalries?

Anderson Silva was at the very peak of his powers when Chael Sonnen began shouting his mouth off at the UFC Middleweight Champion.

Regularly taunting the Brazilian calling him as fake as Mike Tyson, he eventually got a fight with the man in July 2012, and the build-up was just as exciting as the fight itself eventually gaining a rematch.

Before UFC 148, the second of their battles, a pent-up Silva exploded, “He doesn’t deserve to be inside the Octagon and when the time comes and the time is right, I’m going to break his face and break every one of the teeth in his mouth.”

He didn’t, but he did supply plenty of fists to the face, ending the rivalry, and starting the beginning of the end for Sonnen.

But whilst it may have been the beginning of the end for Sonnen, it’s only the beginning for the rivalry between McGregor and Aldo. The pair will get it on in July and McGregor has already been speaking out about taking Aldo’s title away from him.

The pair could spark one of the greatest rivalries in UFC history at the MGM Grand with McGregor stating, “I’m going to rip that Brazilian’s head off.”

Not that he’s favorite to. Aldo, the current UFC Featherweight Champion, just sneaks it according to Betdaq odds, so an upset will certainly spark something.

McGregor hasn’t been the most respectful to Aldo, but that just means it’s going to be one hell of a fight.

It’s almost like the stars aligned for the legendary rivalry between Hughes and St-Pierre. Two of the best ever to grace the UFC, both in the same weight division, and both reaching their primes at the same time, it was the perfect rivalry.

It was one which also produced three brilliant fights. GSP took the rivalry 2-1, but it was Hughes who took the initiative in UFC 50, locking in an armbar in the first round forcing St. Pierre to tap.

It was Rush’s first defeat and was the kick start he needed to become a great, eventually going on to beat Hughes at UFC 65: Bad Intentions, and UFC 79 both inside two rounds.