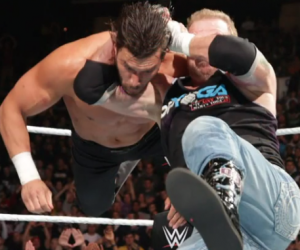 It’s been 13 years since Diamond Dallas Page participated in a WWE Royal Rumble match. But Sunday night, at the ripe old age of 58 (turns 59 on April 5) DDP made a surprise appearance as a contestant in the 2015 Royal Rumble and even landed a Diamond Cutter on Stardust, and another off the top rope on Fandango. DDP has become known in recent years for the work he’s been doing with DDP Yoga and helping older wrestlers like Jake “The Snake” Roberts and Scott Hall get in shape and find new life again. DDP’s performance at Royal Rumble 2015 is yet another testament to how well his DDP Yoga really works. Listen in as Page talks about what his return to the ring meant to him.