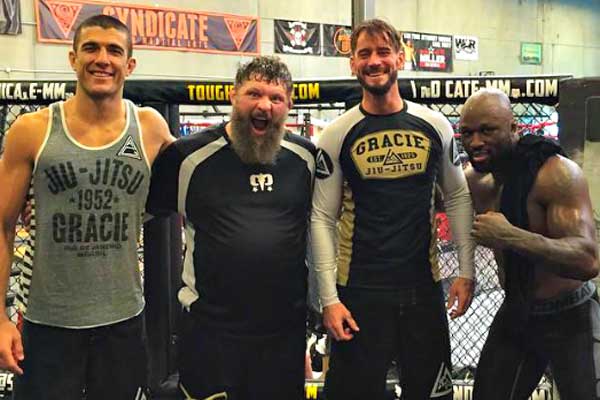 On a live interview on FOX Sports Live Wednesday night newly-signed UFC fighter and former WWE superstar CM Punk revealed he’s actually only sparred MMA with “inexperienced people just a few times” and is still a white belt in BJJ. “I’ve never even got my blue belt,” Punk stated. “I train so infrequently with Rener Gracie… it’s just nothing that’s come about. I know that draws a giant target on my face but I welcome that. I kind of tell everybody that I’m a white belt for life anyway.”

Well isn’t that special. That is a good philosophy but a bad practice if you’re an MMA fighter. Not that belts are the end all be all but it shows you have committed to a martial discipline for a length of time. Are there great fighters who don’t hold belts? Of course. Look at me. I kid… I had a yellow belt in Wa-do-ryu back in 82 son. What. What.

Punk may be in for a rude awakening if he plans to step in the ol’ el’ Octagono in the next year. How will a fake wrestler who does a little BJJ compete with the professional athletes of the UFC? It’s almost an insult I’m sure to many fighters who have worked their asses off for years, paying dues on the regional circuits before ever getting the call to UFC or trying out for TUF.

But the one thing Punk definitely has is a name and he will sell PPV buys. Stone Cold said so. And the UFC desperately needs that at this time. Dana White made the comment following the announcement that they “were back”. Even White sees things have gotten a bit stale as of late. Gettin to the UFC ain’t what it used to be. But it’s understandable that they had to bring on more fighters if they want to implement their long term expansion plan for the UFC.

I guess if fighters can learn to be actors — see the Chael Sonnen act for reference — why can’t actors learn to be fighters? Sonnen was a great fighter who also became great at selling himself as a businessman through what amounted to acting skills. Punk is a very athletic guy and also a great actor and has millions of fans already to prove it. Every adult Chicago male probably knows how to throw a decent enough punch. Throw a few kicks in there, his BJJ background and six straight months of training and Punk could probably not get embarrassed against some regional pros.

I honestly don’t see him being able to hang with anyone on the UFC welterweight or middleweight roster currently. And there’s many regional guys I don’t see him hanging with. I know featherweights that would f*ck Punk up. But, as previously stated, he’s going to sell tickets. He will move that f*cking needle as they say. And we all love a little freakshow now and then don’t we. Just enjoy it. We need it.