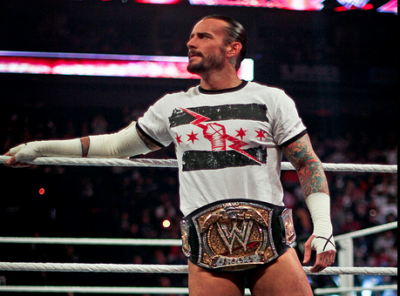 In case you missed the news, former WWE superstar CM Punk (real name Phil Brooks) has been signed by the UFC. The parallels are obvious and reminiscent of when the UFC signed Brock Lesnar back in 2008. The difference though is the 36-year-old Chicago native has no fight experience whatsoever and does not come from a combative sports background as did Lesnar.

Punk does train jiu-jitsu though and was recently seen tapping out Rener Gracie in one of their Gracie Breakdown videos.

Straight jiu-jitsu isn’t going to help you a whole lot these days in MMA though, and Punk’s pro wrestling background isn’t going to be a great help either other than it has kept him in good shape and he’s used to being “physical” with his “opponents”. But even Lesnar, who became the UFC heavyweight champ, never really got used to getting punched in the face.

Having said that, this is a huge boon for the UFC in a time when they desperately need a “superstar” injection.

Talking with Fox Sports following UFC 181 Saturday night in Las Vegas, UFC President Dana White explained why he signed the WWE superstar, “He comes to all the fights, he’s a huge fan, and once his deal was up with the WWE he called me and said, ‘I’d really like to fight in the UFC’. I told him, ‘You got no fights.’ But he wants to try it and obviously the guy’s a huge superstar. I’ll give him a shot.”

White understands MMA fans’ skepticism, agrees with it, but wants to give Punk this opportunity. What can it hurt after all? The UFC has ridden the fine line between entertainment and sport for a long time now, and once in awhile the scale tips heavily into the entertainment department and away from sport.

“I’m absolutely skeptical,” admitted White. “Who knows, you don’t know unless you try. You don’t know if the guy can fight unless he fights. He wants to fight here. He’s like, ‘I’m at an age where I don’t have time to go, you know, work on my game and work my way up to the UFC. I’d like to start here. I’d like to give it a shot, if you would give me that opportunity.’ And I said yes I will.”

Let’s be honest. The sporting product the UFC is putting out right now has grown a bit stale with too many shows and not enough superstars — a watered down product compared to what fans were used to. So in that sense, this is a smart move for MMA’s premiere organization. At least it will draw some fresh eyeballs as long as they can ride this CM Punk train.

But here’s what you should not expect. Don’t expect Punk to win a title in three fights as did Brock Lesnar. In fact, don’t ever expect Punk to hold a UFC title. Can you imagine him fighting a guy like current UFC middleweight champ Chris Weidman? Me either. Or new welterweight champ Robbie Lawler? Good god.

We don’t know how actively Punk has been training his striking and wrestling, but we know FOR SURE he is behind the 8-ball here. And it’s sink or swim time — or at least it will be shortly when he steps into the Octagon for the first time.

The UFC President isn’t yet sure on when Punk’s debut will be. “That I don’t know. I think what he wants to do is take his time, start training, get with the right camp. It might be six or seven months,” White said.

We’ll all be waiting.

Sound off in the comments, we want to hear your thoughts on CM Punk in the UFC.
[ads1]
[ads2]