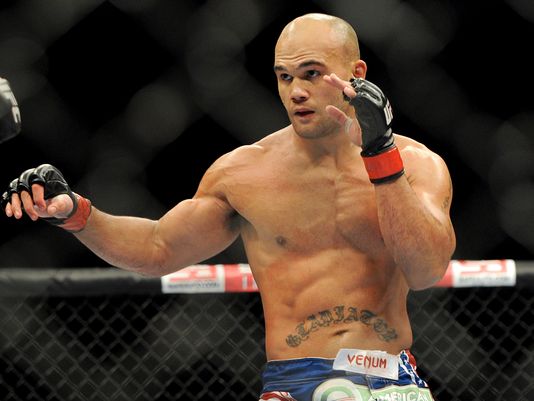 The rematch! Robbie Lawler has completely turned his career around since returning to the UFC. He’s been on a break neck pace with his only blemish of late coming at the hands of champ Johny Hendricks. The two met in March to see who would fill the shoes of Georges St. Pierre. Hendricks came out on top of that UFC 171 main event.

Lawler has fought twice since then but Hendricks has been out due to a torn bicep. The two met in Las Vegas in the headliner of UFC 181.

The two didn’t touch gloves but came out hard. Lawler pushed the pace and had near perfect takedown defense. Hendricks kept him pushed up against the fence but struggled to get him down. Lawler landed a few decent shots but ended up on his back as the round came to a close.

Hendricks came out strong in the second with a plethora of leg kicks. Lawler landed a good head kick himself but came up on the bad end of several shots that were putting him behind on the score cards. Hendricks followed up with a big takedown just over halfway in the round. With just over a minute to go Lawler landed a great front kick that pushed Hendricks back. Lawler slipped in the final seconds opening up a submission attempt but the time expired.

Hendricks looked to get better as the third round progressed. He looked way more relaxed and continued to mix up his kicks and combinations to keep Lawler’s offense from getting a start. At the halfway point he was able to get a takedown but continued to Lawler up against the fence. Hendricks cruised in taking the round on the scorecards.

The championship rounds started with Lawler throwing out a combination but Hendricks answering quickly. Lawler found himself up against the fence defending a takedown once again. Herb Dean restarted the action and Hendricks went right back to work. Lawler showed signs of resurgence with a head kick but was put right back into the fence. Lawler punished Hendricks in the closing seconds to possibly steal the round.

Hendricks started the fun with a couple shots and a bullrush into single leg. Lawler defended against the cage but lost precious time that he should be scoring points. Hendricks landed a quick combination and then kept the pressure on. Lawler was against the fence where he has been so much of the fight without an answer. With a minute to go Lawler starts to pound on Hendricks and then explodes to finish the round.

The judges couldn’t agree. It came down to a split decision with Lawler walking away the new champion! Tough fight and no doubt we will see a trilogy match.