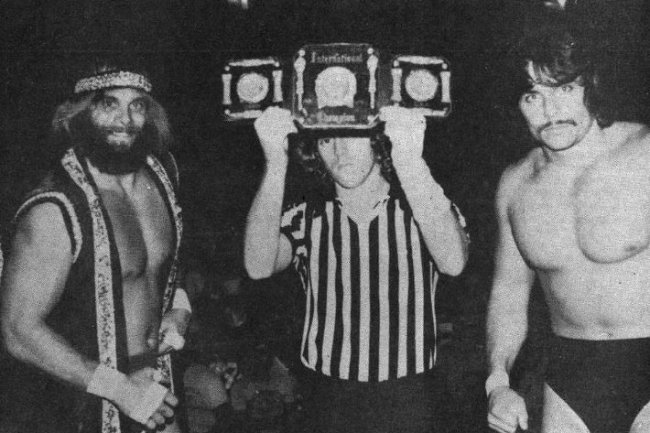 Poffo joined WWE as “Leaping Lanny” Poffo in 1985 and would bring frisbees to the ring, read a short ode written on one of them that he himself had penned, and throw the frisbees into the crowd. The poems typically ridiculed the bad guy that he was about to wrestle against, or simply used to make them visibly angry. While not typically not a main eventer on television during his early career in the WWF, he was usually allowed to get in a fair amount of offense in his matches, and won some matches on occasion. In April 1989, Poffo was re-introduced as “The Genius”, adopting a highly intelligent, arrogant persona, wearing an academic cap and gown to the ring.

Lanny talks about how he came to WWE

“Well, we didn’t sign anything. Everything was per diem. They wanted him really bad and I was thrown in. They asked me if I wanted to be a heel or a baby face, and I figured since they didn’t have anything for me I’d be a babyface because I think it’s real depressing to be a heel without a gimmick. I got really lucky a few months later I was a guest on Tuesday Night Titans and I figured if I was boring they’d never invite me back. So I wore a suit of armor and I did a poem. Vince didn’t like the suit of armor very much, but he liked the poem and said from then on I do a poem before every match.”

On why his brother Randy was angry with WWE

“On November 6, 1987, Randy started to hate WWE (referencing Randy Savage asking that his father be included in a legends battle royal, only for WWE to turn it down). They said Killer Kowalski, Pat O’Conner, Lou Thesz, Bobo Brazil is gonna be there. My dad looked at Randy and said ‘there is a battle royal on the Meadowlands, can you get me on it?’ Dad was always proud of how good he looked, and he still did. Randy said ‘don’t worry, it’s done,’ and thought he would have the stroke to do it. Later Randy grabbed me by the wrist and says ‘(expletives), they’re not gonna let Dad in the battle royal because they’re no good (expletives).’

“Randy blamed the authority that Vince gave to Pat Patterson and Chief Jay Strongbow, and Randy used to treat those guys with a lot of respect. After this, Strongbow evidently got thrown out (in the battle royal) and broke his arm. Backstage he’s walking around in the ring and Strongbow says, ‘Lou Thesz broke my arm,’ and Randy says, ‘Lou didn’t break your arm, you’re too fat to be in the ring, you’re a disgrace.’ So Randy decided to not have respect for them. It didn’t make him any friends, but they didn’t like him anyway evidently. That was the time he changed his smile to a scowl and spent the rest of his time in WWE with a chip on his shoulder. In the (new Randy Savage) DVD, the rough cut, I tell ya what, Pat Patterson’s in it, and he verifies about everything I said about him. If Randy were alive today, he’d be really disappointed that one of them were dead.’

“I just wanted to say Randy was a great man, and you know he was. He was also a good man, and I think that’s even more important. Randy knew deep in his heart that he was thankful to Vince McMahon for all he had. He was 32 when he finally got his break and the window of opportunity was closing. Whatever small argument they may have had, I think it’s just ridiculous to not see the big picture that Randy loved Vince and Vince loved Randy.”

Check out all of what Lanny said including the fact that people shouldn’t “hold their breath” waiting for Savage in WWE’s Hall of Fame. The full interview is here.