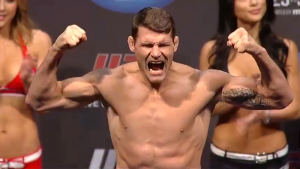 Joe Rogan, UFC color commentator and host of The Joe Rogan Experience Podcast, had MMA manager Ryan Parsons on his show last week and the two, among other things, talked about the toughness and grit of one Michael Bisping — who just happens to have a fight coming up against Luke Rockhold on Nov. 8th in Sydney. Rockhold is the favorite to win that fight by the way, with odds sitting at -420 Rockhold vs. +335 for Bisping.

“I have never met anyone that wants to win more than Michael Bisping,” replied Parsons, who said Bisping has been training with some of his guys. “He wants to win every training session, every go, every situation. That guy is a winner for sure.”

“He’s a fucking animal,” said Rogan. “And he doesn’t have extreme athletic talent or extreme physical gifts. It’s just cardiovascular, training, discipline, will, toughness. He’s got all these other things. But you look at a guy like a Jon Jones, who is just this incredible physical talent. You look at a guy like Hector Lombard, ridiculous physical talent on top of the discipline and all that stuff. Bisping, just a normal guy. Just a normal guy who’s tough as shit. Tough as shit. He doesn’t get enough credit. I really don’t think he gets nearly enough credit.”

“What I like about him is grit,” said Parsons. “And they found that grit is a much better predictor of success than IQ is. So when you find someone who really wants something and they’re willing to suffer and keep going and failing it up again and failing it up again, that’s the guy you got to put your money on. And Bisping does that better than anyone.”

“He certainly does, but him against a guy like Anderson Silva in his prime,” Rogan rebuttled. “That’s like this crossover, like where the land of grit meets this extreme talent, and confidence and just that rare quality the G.O.A.T.’s possess, the greatest of all-times guys, that rare thing that Anderson had for a few years in his prime.”

How do you think the brash Brit will standup to Rockhold this weekend at UFC Fight Night 55? Will his grit see him through or is Rockhold going to land one of those devastating body kicks to end it?
[ads1]
[ads2]