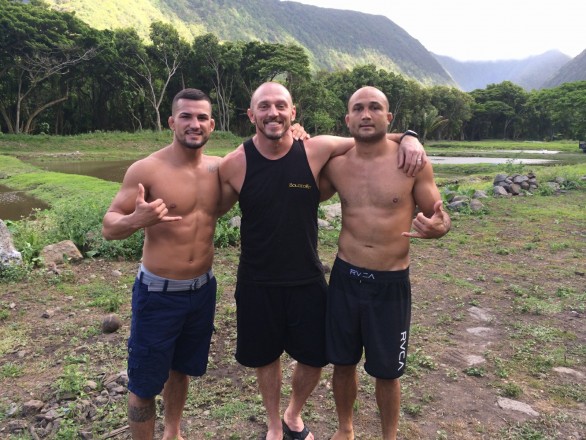 The feud between former UFC lightweight and welterweight champion BJ Penn and fitness guru to the stars Mike Dolce continues. In a new interview with BJPenn.com, Penn accuses Dolce of giving him four types of diuretics to suck out the water and make weight and says Dolce “didn’t have the knowledge, or the expertise to put the water back in, without an I.V.”

“I took Expel, Dandelion Root, UVA Ursi and one more, I forget the name. This was the first time a nutritionist ever offered me diuretics to make weight, in my whole career.

“The day before the weigh-in I was at 147 pounds. On that day, I addressed some concerns to Dolce about how I could not carry my bags or walk up any large amount of steps. My heart rate would shoot up and I would feel like fainting, but his approach didn’t change.

“He didn’t have me sit in a jacuzzi to sweat, like you usually see him do. All he did was give me pills to suck all the weight out of me, but he didn’t have the knowledge, or the expertise to put the water back in, without an I.V.. (Previously a welterweight and lightweight, Penn walked into the cage at just 148lbs.)

“Look how Ronda cut weight. She was 10 pounds over the day before weigh-in. I was only a pound over. He says Ronda didn’t use an IV either, but we cut weight totally different.

“Mike Dolce does help a lot fighters, I’m not sitting here saying he’s totally useless. But he has no degree, no formal training, and there are a lot of holes in his game.”

It should be noted that diuretics are on WADA’s banned substances list although they don’t specifically list the ones Penn described (Dandelion and UVA Ursi are herbs and you can see the ingredients of Xpel here).

The two have been going back and forth on Twitter and in interviews ever since Penn hired Dolce as his nutritionist and help him make weight for his final bout in the Octagon against Frankie Edgar at the TUF 19 Finale in July. Penn used a very unorthodox fighting style during the bout and suffered a third round TKO loss.

Prior to this interview, the latest exchange on Twitter had BJ warning Dolce that one day he would see him again and it wouldn’t be pretty:

@TheDolceDiet Keep talking, I'm gonna have a heart to heart talk with your glass jaw when I see you.

Dolce said it would’ve been nice if BJ showed this type of aggression against Edgar — ouch!

@bjpenndotcom Wow, very classy! Where was all this aggression on the night of July 6th?? #BullyJ