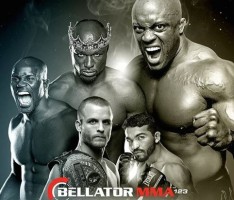 Bellator 123 takes place this evening at Mohegan Sun in Uncasville, Conn., and features a featherweight title fight in the main event as champion Pat Curran tries to hold onto his belt in a rematch with Patricio “Pitbull” Freire. Also, King Mo returns against UFC vet Dustin Jacoby in the co-headliner. Preliminary card action kicks off at 6 p.m. ET and you can catch a live stream on ProMMAnow.com here: Bellator 123 prelims live stream. The main card will air live on Spike TV at 8 p.m. ET. ProMMAnow.com (www.prommanow.com) will provide LIVE results and round-by-round updates of the event. NOTE: We’re also doing live results and updates for tonight’s UFC Fight Night 50 card being held just a few miles away from this event.

Round 1 -Touch of gloves. Johnson comes out swinging. Lands a big right early to Kongo. Kongo up. Johnson slips and Kongo takes advantage by getting on top. Johnson is stuck on his back. Kongo in full mount. So far Kongo hasn’t landed anything but may be trying a keylock. Shots to the body from Kongo. Boo birds coming out as the fight slows down. Body, body then head by Kongo. Kongo has lit the ribs up of Johnson. Kongo misses s shot and Johnson tries to escape. Kongo gets Johnson’s back and goes for a rear naked choke. Johnson taps out.

Round 1 – Lashley fires away first with a jab. Lashley off the mark thinks about takedwon. He pulls out then tries again. Drops Burns and takes his place on top. Lashley to side control and gets Burns arm. Keylock is in but Lashley lets it go. Lashley stays in side control. Another keylock from Lashley but he lets it go again. Burns doesn’t even seem to try to get up. Elbow to the body from Lashley. Burns bleeding with 90 seconds to go in the first. A kimura attempt by Lashley. Elbows for days coming from Lashley. Lashley throws some big punches from the top. Completely dominant round from Lashley. PMN scores it 10-8 Lashley. Round 2- Lasley workng his jab. Burns looks like he is standing in cement. Right hand lands from Lashley. Burns throws a left hand, off the mark. Lashley with a takedown. Lashley landing some shots. Elbow to the head of Burns. Lashley throwing a ton of shots. Burns tries to get up but Lashley has his back. Lashley locks in the choke and Burns taps.

Round 1 – Ward starts the fun with a couple short jabs. McCrory puts together a nice combo. BAM! Three punches and lights out from McCrory. Knockout. Ward was out.

Round 1 – Jacoby jabs his way out. Mo gets a leg and takes Jacoby down. Great exchange while they are down. Mo resets but Jacoby to his feet. Mo drops him again. Jacoby scrambling well but can’t get up to create any space. Mo hangs on to the single leg as Jacoby gets up. He hits him with a big punch as Jacoby falls. Mo presses Jacoby against the fence and takes his back. Jacoby tries to spin out but eats some punches. The fighters are back to their feet. Swing and a miss by Jacoby. Jacoby with an overhand right that is off the mark. Mo brings the right hand. Mo clowning Jacoby, Anderson Silva style. Looping left from Jacoby. High kick off the mark by Jacoby. Round ends. PMN scores it 10-9 King Mo. Round 2 – Jacoby starts out trying to gauge his distance. Big right hand by Mo. Left hand lands from Mo. Jacoby rocked and Mo fires away. Jacoby on his back eating big shots from Mo. Jacoby taking elbows and punches before Big John stops it.

Round 1 – Low kick to start from Curran. I think Eric Holden just started the USA chant from press row. One minute in and not much action. Fighters in the middle of the cage and Pitbull pushes forward with a straight left. Curran with a left of his own. Curran slips but gets right back up. Left hand from Curran. Curran back to the low kicks. Boo birds coming out due to the slow action. Low blow but they fight on. Pitbull gets ahold of Curran but can’t get him down. Works the second time but Curran bounces back up. Curran is more active but not accurate. Overhand right off the mark by Pitbull. Hard to score, have to go with Curran 10-9.

Round 2-Pitbull pushes forward, Curran slips but is back up. Fighters lock up and Pitbull lands a knee. Low kick from Pitbull. Curran throwing some low kicks. Pitbull bouncing around. Pitbull lands a good combo. Left hook lands to the dome of Curran. Curran fires back and then goes for a takedown. Curran tries to regroup. Pitbull swings but is off the mark. Curran misses on a right hook. Right hand lands by Curran. Big shot from Curran as the round ends. PMN sees it 10-9 Pitbull, 19-19 after two.

Round 3 – Low kick to start by Curran. Pitbull locks up Curran but nothing doing. Stiff left lands from Pitbull. Right hand answer by Curran. Left hand connects from Curran. Left hand drops Curran. Pitbull rushes in but Curran bounces up. Curran seems fine. Pitbull throwing jabs. Low kick from Pitbull. Curran misses to the body, right hand connects though. Curran goes for a double leg but Pitbull defends. Curran tries again but can’t get it. Curran sneaks in a right hand. Rounds over. Pitbull takes that one, PMN has the fight 29-28 Pitbull.

2 thoughts on “Bellator 123: Curran vs. Pitbull 2 LIVE results and updates”